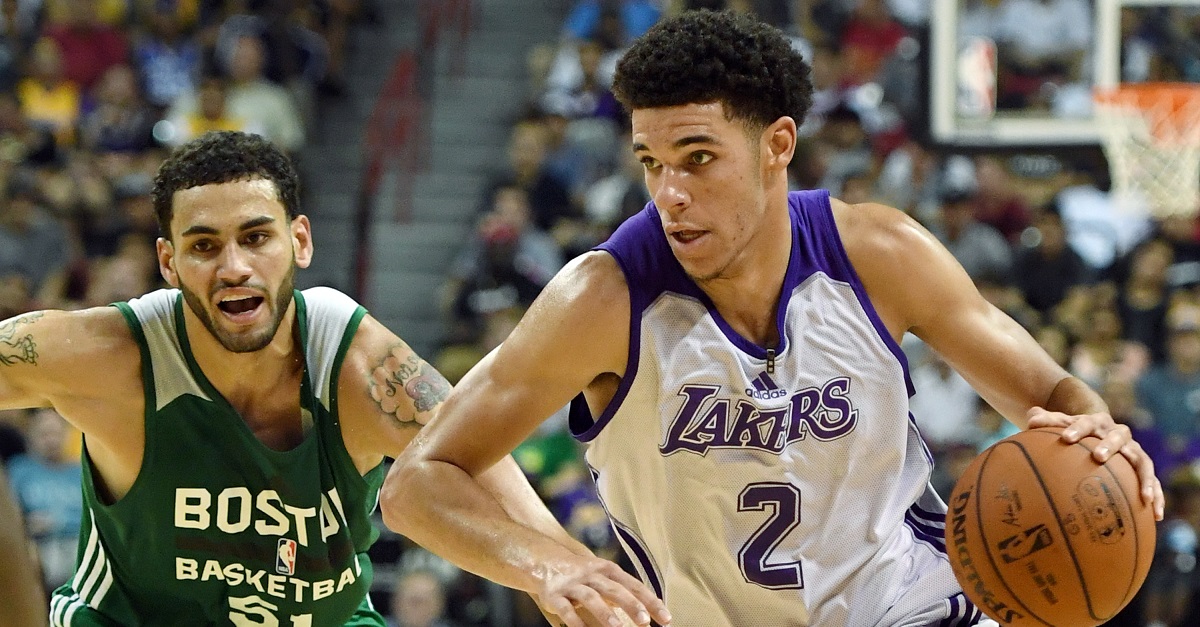 Ethan Miller/Getty Images
LAS VEGAS, NV - JULY 08: Lonzo Ball #2 of the Los Angeles Lakers drives against Abdel Nader #51 of the Boston Celtics during the 2017 Summer League at the Thomas & Mack Center on July 8, 2017 in Las Vegas, Nevada. Boston won 86-81. NOTE TO USER: User expressly acknowledges and agrees that, by downloading and or using this photograph, User is consenting to the terms and conditions of the Getty Images License Agreement. (Photo by Ethan Miller/Getty Images)

Lonzo Ball has taken a lot of trash talking on Twitter and elsewhere because of his dad’s outspoken nature as well as his first Summer League game. He was absolutely horrific in the game, but recovered with a triple-double the next game. Now he’s getting crushed though for sitting out a game the Sacramento Kings who happened to draft De’Aaron Fox.

The two have a bit of a feud as Fox absolutely crushed Ball in their Sweet Sixteen matchup back in March. The former Kentucky guard held Ball to just 10 points while pouring in 39 of his own. So the excitement for their Summer League matchup was pretty high until Ball was announced as out for the game. That led to some pretty harsh criticism from one NBA scout since it was a minor groin issue.

Scout on Lonzo Ball sitting vs. De'Aaron Fox: "That's ridiculous. I'd be pissed if he was on our team."

Most guys would want to take revenge on someone like that and show that they are past it and better than that 10-point performance. Teammates and coaches want to see the fire of competition in a case like that, but Ball claims that the team kept him out of the game and that he ?definitely wanted to play,? per The Washington Post.