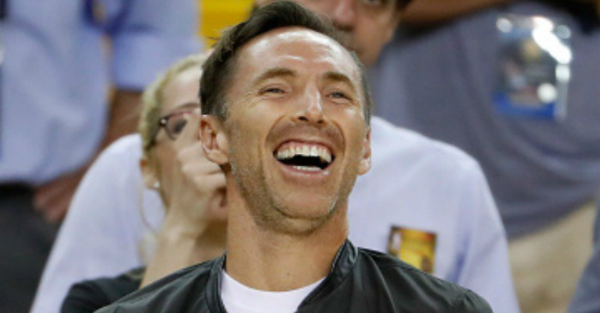 Steve Nash was a great player. He played 18 seasons in the NBA in Dallas, Phoenix and Los Angeles, and was a consummate point guard who could handle the ball and shoot. He averaged double digits in assists seven times, shot .428 from three for his career, and was a two-time MVP. The only thing he didn’t do was win an NBA title. Phoenix went to the Western Conference Finals four out of six seasons (2004-2005 to 2009-2010) and lost each time.

But Nash’s streak ended when the Golden State Warriors beat the Cleveland Cavaliers 4-1 to win the 2017 NBA championship. Nash is a team consultant and member of the front office, and will get that coveted ring.

Steve Nash, who never made it to the NBA Finals as a player, just won a ring. He's a player development consultant for the Warriors.

He was caught, at court side, beaming, and recording head coach Steve Kerr’s remarks during the trophy presentation:

Steve Nash, a player development consultant for the Warriors, recording the trophy presentation on his phone. pic.twitter.com/p5q4rNYwjO

And wow, was he happy.

Congratulations to a real pro.