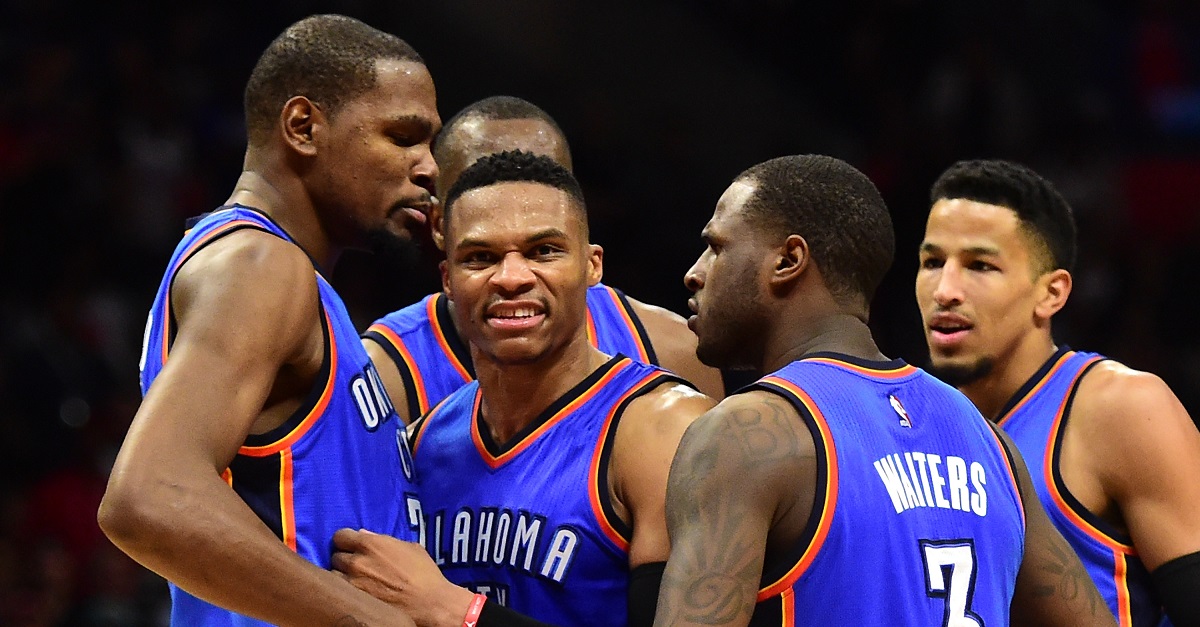 LOS ANGELES, CA - DECEMBER 21: Russell Westbrook #0 of the Oklahoma City Thunder celebrates his defense on J.J. Redick #4 of the Los Angeles Clippers with Kevin Durant #35, Serge Ibaka #9 and Dion Waiters #3 and Andre Roberson #21 during a 100-99 Thunder win at Staples Center on December 21, 2015 in Los Angeles, California. NOTE TO USER: User expressly acknowledges and agrees that, by downloading and or using this Photograph, user is consenting to the terms and condition of the Getty Images License Agreement. (Photo by Harry How/Getty Images)

Russell Westbrook looks like he’ll be losing yet another teammate this season as the Oklahoma City Thunder have rescinded their qualifying offer to shooting guard Dion Waiters according to The Vertical.

Sources on @TheVertical: Oklahoma City has rescinded qualifying offer on Dion Waiters, allowing him to become an unrestricted free agent.

RELATED: Westbrook is definitely ‘ticked off’ and that’s good

Waiters played in 78 games for the Thunder last regular season, averaging 9.8 points and 2.6 rebounds in 27.6 minutes per game. He joined Oklahoma City midway through the 2014?15 season via a trade from the Cleveland Cavaliers. He struggled mightily in the playoffs averaging only 8.4 points and shooting under 42 percent from the floor. But there is likely a team out there that will give him a bigger role and overpay for him so that OKC can’t bring him back.

This would mean that Victor Oladipo definitely would step in to the starting shooting guard role while Anthony Morrow and Randy Foye fight for minutes off the bench. Waiters was initially given a qualifying offer for $6.7 million, but with the Thunder taking that offer off the table he becomes unrestricted and can sign with any team willing to pay for his services.