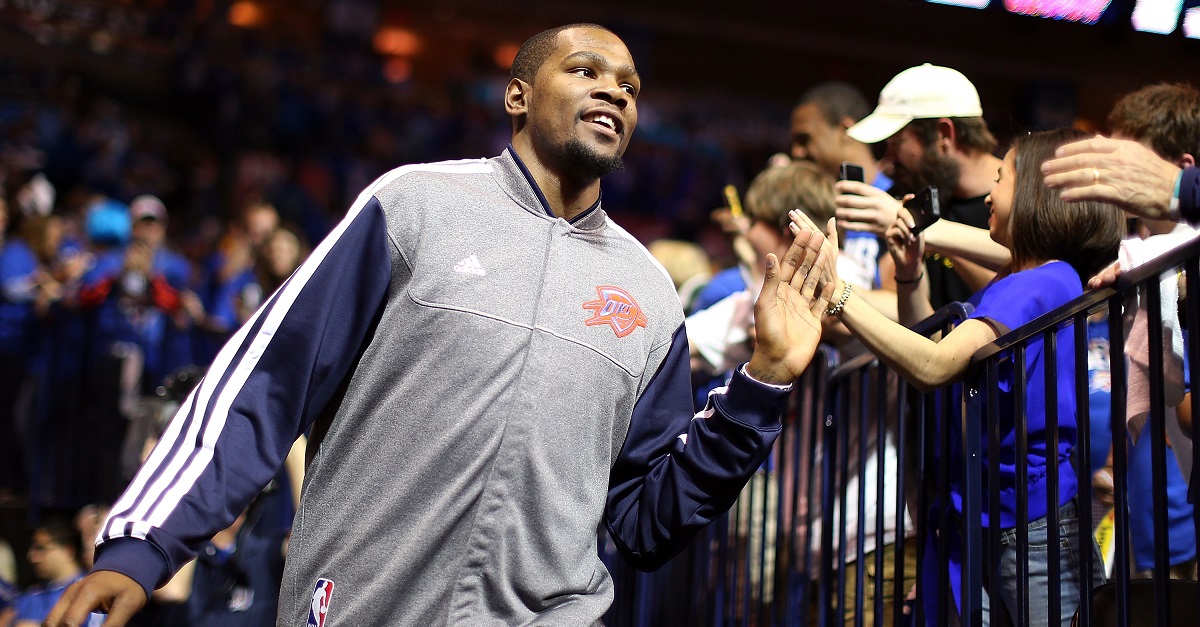 Christian Petersen/Getty Imags
OKLAHOMA CITY, OK - APRIL 21: Kevin Durant #35 of the Oklahoma City Thunder high-fives fans as he runs out onto the court before Game One of the Western Conference Quarterfinals of the 2013 NBA Playoffs against the Houston Rockets at Chesapeake Energy Arena on April 21, 2013 in Oklahoma City, Oklahoma. NOTE TO USER: User expressly acknowledges and agrees that, by downloading and or using this photograph, User is consenting to the terms and conditions of the Getty Images License Agreement. (Photo by Christian Petersen/Getty Images)

Kevin Durant has taken his fair share of criticism for signing with the Golden State Warriors this offseason. There are those who think he’s taken the easy way out in order to win a championship and then there are those who say that a move like this destroys the level of competition in the league.

RELATED: Charles Barkley says KD is trying ‘to cheat’ his way to a title

The Warriors already got to the NBA Finals without Durant and now will have a much more loaded roster with him starting over a Harrison Barnes or Andre Iguodala. In a recent interview, Durant found an unlikely defender of his move farther west in LeBron James who said that the move actually makes the league more competitive.

So, I think it’s all great for our league. Our league is very competitive. It’s continued to grow, and [NBA Commissioner] Adam Silver has done a great job of picking up where David Stern started, so it’s pretty cool …

That’s completely wrong as Durant’s move absolutely tilts the power of the league even more in favor of the Warriors. It’s almost a two-team race for the Finals as the Cleveland Cavaliers and Warriors should be the favorites with a few teams maybe challenging them in the postseason like the San Antonio Spurs, Los Angeles Clippers and Boston Celtics (in the East).

RELATED: LeBron James thinks MJ gets way too much credit for his six titles, and he couldn’t be more wrong

While he may be right that each case of players signing with different teams is different, that doesn’t mean it’s what everyone would call “alright” as far as competition level goes. The more teams that have close records the better because then it becomes a bit of a crapshoot who wins the title and those years are usually the most fun to watch the playoffs.