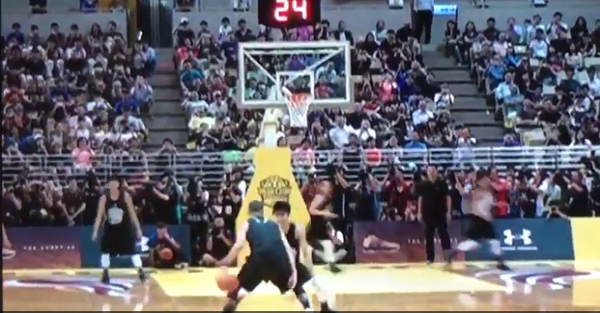 Stephen Curry is on a tour of Asia right now for Under Armour and it doesn’t look like it’s going as well as planned. He was playing in a game with some teenagers from the Philippines and it turns out these weren’t just some schmoes off the street. At least one of them, Gian Mamuyac, plays at Ateneo High School — a super popular basketball academy in the country.

RELATED: Newest odds for league MVP don’t have Curry as the favorite

He’s still a six-foot tall skinny 17-year old and shouldn’t be in the same class as Curry, right? WRONG! He defended the two-time MVP on the last possession of the game and not only stayed in front of Curry, but blocked his potential game-winner.

I think Mamuyac just took Curry’s MVP trophy away from him. Curry clearly still has some work to do to get back to MVP form for the 2016-17 season.