This was the heartbreaking moment ESPN reported Craig Sager’s death 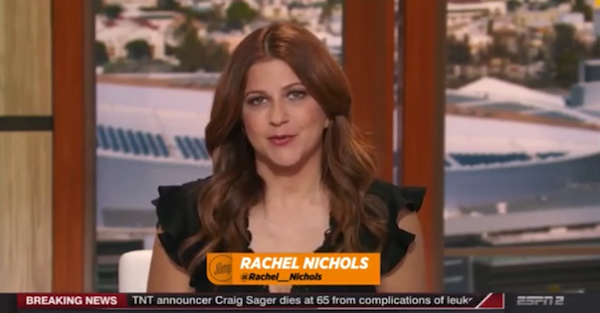 Veteran sideline reporter Craig Sager passed away on Thursday after a two-year battle with leukemia.

The 65-year-old sideline reporter worked with Rachel Nichols during her stint at TNT, and the emotional host of ESPN’s The Jump was tasked with sharing the news of Sager’s passing on television.

Sager had been battling a form of leukemia for the past two years, and upon his most recent diagnosis in March, Sager decided to continue his work with TNT while battling the disease.

Sager had a been a fixture in sports reporting for over 40 years, covering topics ranging from Hank Aaron’s 715th home run, to his yearly work with the NBA on TNT.

He was awarded the Jimmy V Perseverance Award at the 2016 ESPY Awards for his daily battle with leukemia.

Our thoughts are with the Sager family.

(H/T Uproxx for the video)