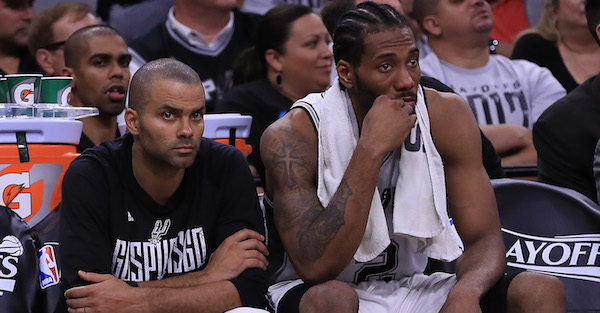 Ronald Martinez/Getty Images
SAN ANTONIO, TX - MAY 01: (L-R) Tony Parker #9 and Kawhi Leonard #2 of the San Antonio Spurs sit on the bench in the fourth quarter during Game One of the NBA Western Conference Semi-Finals against the Houston Rockets at AT&T Center on May 1, 2017 in San Antonio, Texas. NOTE TO USER: User expressly acknowledges and agrees that, by downloading and or using this photograph, User is consenting to the terms and conditions of the Getty Images License Agreement. (Photo by Ronald Martinez/Getty Images)

It’s been a long time since 2007 NBA Finals MVP Tony Parker has been able to suit up for the San Antonio Spurs. The veteran point guard has missed an extensive period of time since he suffered a torn left torn quadriceps tendon last season.

The Spurs have managed to stay the course of their winning ways, sitting in third place in the Western Conference with a 12-7 record to start the 2017-18 season.

However, they’ll be getting a much-needed boost, as Parker took it upon himself to announce his return to the hardwood when San Antonio takes on Dallas on Monday.

“Get ready #SpursNation, I?m coming back on tomorrow?s game against Dallas!
I’m really excited to play again. It has been some tough months with a lot of recovery, patience and mental strength. I wanted to thank everyone who believed in my return. Fans, Family, Friends, my Recovery Team and the San Antonio Spurs, I couldn’t have done this without your support.

Parker, who will turn 36 years old next spring, is entering his 17th season with the Spurs. While he doesn’t present the same kind of effect on the game that he once did ? with his quick first step and deadly tear-drop floater ? Parker still adds a veteran presence to the lineup.

And he’ll be a huge piece of the puzzle, as the Spurs try to make another championship run.