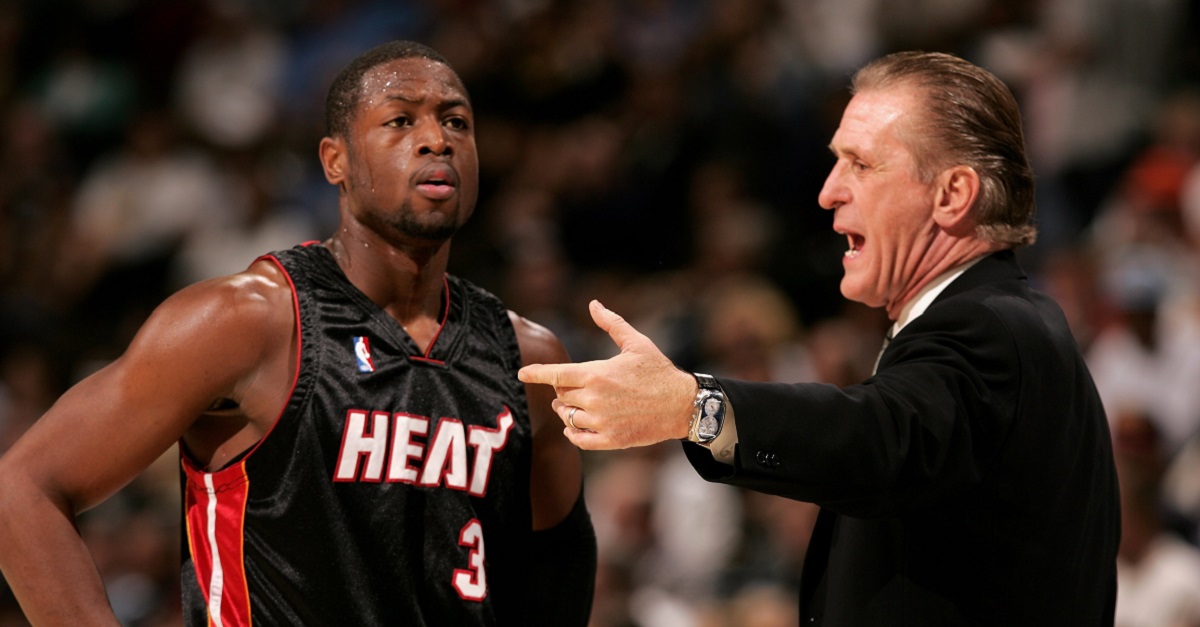 DENVER - DECEMBER 08: Head coach Pat Riley talks with Dwyane Wade #3 of the Miami Heat as they face the Denver Nuggets on December 8, 2006 at the Pepsi Center in Denver, Colorado. NOTE TO USER: User expressly acknowledges and agrees that, by downloading and or using this photograph, user is consenting to the term and conditions of the Getty Images License Agreement. (Photo by Doug Pensinger/Getty Images)

Dwyane Wade is now a Chicago Bull after 13 seasons as a member of the Miami Heat because the Heat refused to pay him what he thought he was due. After taking pay cuts on the last couple of contracts, Wade wanted to be repaid in full, but Pat Riley didn’t make it happen this summer.

RELATED: D-Wade is out of Miami and that’s what pat Riley might have wanted all along

There were reports that Riley didn’t contact Wade at all during the free agency process and that was what ultimately led to Wade moving north. Riley spoke at a press conference to discuss the state of his team during this offseason and apparently was “floored” by Wade’s decision.

“What happened with Dwyane floored me,” Riley said. “I’m going to miss the fact of what I might have had planned for him and his future and how I saw the end and my thought process in how I could see his end here with the Heat… It’s my responsibility to sort of make that happen. I didn’t make it happen. Dwyane left, and the buck stops here.”

Riley went on to say that he should have pulled out all the stops to bring the franchise’s favorite player back to Miami, but now regrets he didn’t. It also sounds like it was definitely way too little way too late for Riley trying to get Wade’s attention.

Usually Riley is a lot smoother when it comes to negotiating and sealing a deal, but this sounds like a complete botch job. Or he’s covering up for the fact that he really didn’t care if the team brought Wade back and he wanted to start a rebuild around Hassan Whiteside. We’ll probably never know the truth for sure, but this wasn’t a good look for Riley or the Heat.