Tyronn Lue finally put LeBron James in his place, and that’s been the difference in Cleveland 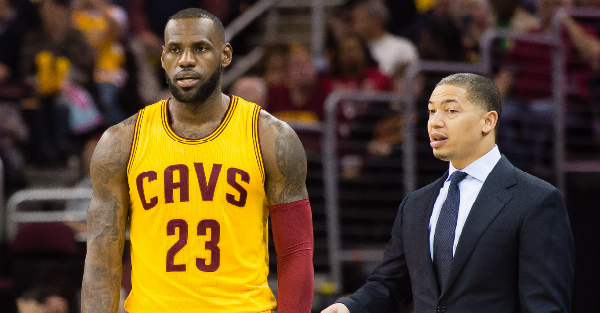 CLEVELAND, OH - MARCH 31: LeBron James #23 talks with head coach Tyronn Lue of the Cleveland Cavaliers during the first half at Quicken Loans Arena on March 31, 2016 in Cleveland, Ohio. NOTE TO USER: User expressly acknowledges and agrees that, by downloading and/or using this photograph, user is consenting to the terms and conditions of the Getty Images License Agreement. Mandatory copyright notice. (Photo by Jason Miller/Getty Images)

The disrespect was evident from the moment David Blatt took the head coaching gig with the Cleveland Cavalier, playing essentially second fiddle to LeBron James.

After he was fired midway through the season, Tyronn Lue took over and showed LeBron James who is in charge, according to CBS Sports:

“Lue changed that the moment he first told James in a huddle, “Shut the [expletive up]. I got this,” according to a person who heard the exchange — and a few others like it. If Lue was going to get the stars and the role players to buy into the strategic changes he was determined to implement — play faster, space the floor, move the ball, take full advantage of Love’s versatility — he was going to have to restore order first.

He did it in every way possible, starting with James — calling him out in film sessions, barking at him in practice, seizing control back. Only then could the Cavaliers evolve into the juggernaut we are witnessing now.”

And since then, all the Cavaliers have done is roll through the regular season with a No. 1 seed, and blitz through the Eastern Conference playoffs to nine consecutive wins.

Imagine if this had happened the first time James landed in Cleveland?