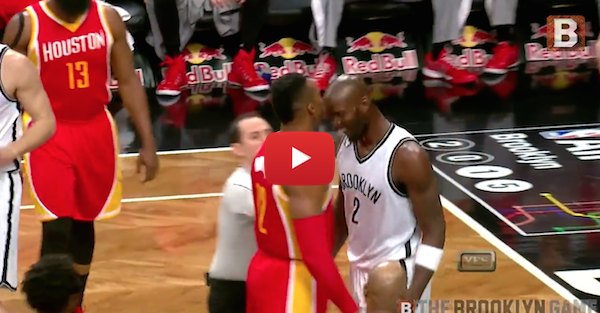 It didn’t take long for Brooklyn Nets forward Kevin Garnett to get fed up with Houston Rockets center Dwight Howard.

Early in the first quarter, Garnett gives a little bump to Howard, who responds with a shove of his own.

It didn’t end there though, as Garnett threw the basketball at Howard, then proceeded to headbutt him. Howard responded with what looked like a shove to the neck, as you can see above.

After review, officials determined KG has been ejected. Dwight stays in game.

Garnett has seemed even more over the edge this season than usual, chasing Anderson Varejao around the court, acting as if we was going to bite Joakim Noah and blowing in David West’s ear.