What Kevin Durant’s decision means for OKC and the Warriors 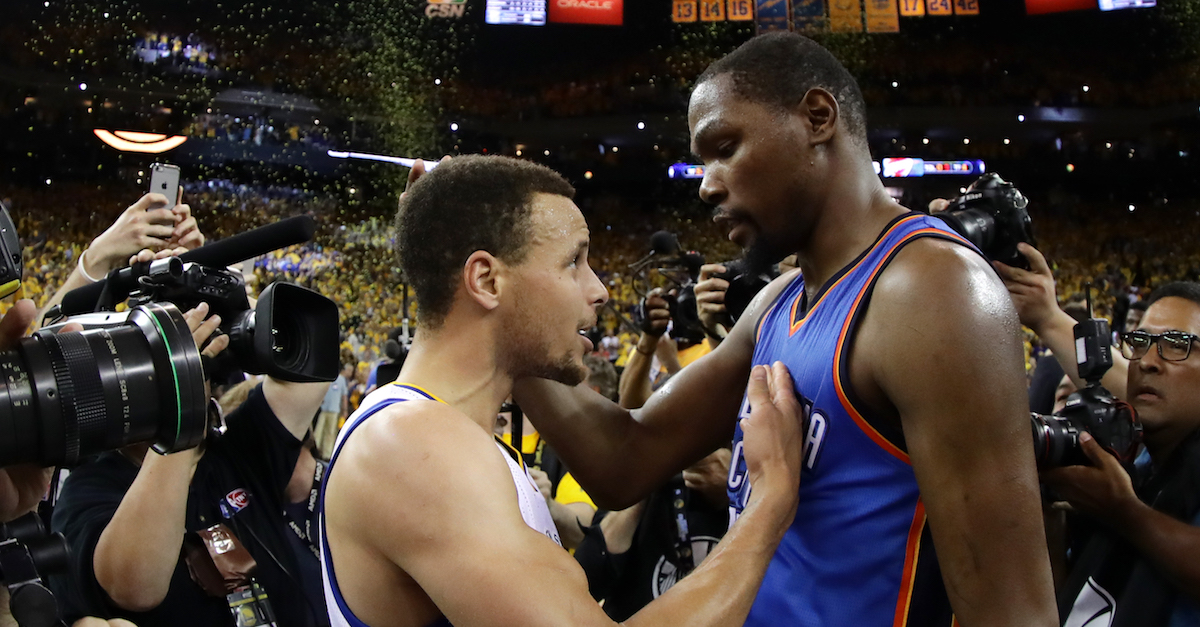 OAKLAND, CA - MAY 30: Stephen Curry #30 of the Golden State Warriors speaks with Kevin Durant #35 of the Oklahoma City Thunder after their 96-88 win in Game Seven of the Western Conference Finals during the 2016 NBA Playoffs at ORACLE Arena on May 30, 2016 in Oakland, California. NOTE TO USER: User expressly acknowledges and agrees that, by downloading and or using this photograph, User is consenting to the terms and conditions of the Getty Images License Agreement. (Photo by Ezra Shaw/Getty Images)

Kevin Durant will become a member of the Golden State Warriors this coming NBA season and the world will never be the same. Everyone is already handing the Warriors next year’s championship, but the road to the Finals might not be as easy as people believe.

While the Warriors do have guys like Klay Thompson, Steph Curry and Draymond Green on the roster, that’s really about it. In order to sign Durant to his two-year deal that could be worth about $54 million.

Kevin Durant will sign a two-year deal with the Warriors at $54.3 million, league sources say, with a Player Option for Year 2

The Warriors are already looking for trade partners to shed Andrew Bogut’s $11 million from the payroll and could stretch his contract over three years to make cap space if no one trades for him. Harrison Barnes is likely gone as the Dallas Mavericks intend to extend a full-max offer to him and while the Warriors could match it, that would put them in deep luxury tax territory.

Electing to renounce the cap holds on Mareesse Speights, Leandro Barbosa, Brandon Rush, James McAdoo, Ian Clark, Jermaine O?Neal and Ognen Kuzmic would free up $17 million in cap space. The players renounced could only sign for the minimum or midlevel room if Golden State elected to bring them back.

RELATED: Reports are out that KD has picked a team, but there’s a problem

This would mean that the rest of the roster would be filled out by the young players the Warriors have recently drafted and any veterans willing to take the minimum. While the Big Four are fantastic and could probably beat a lot of teams just playing four-on-five, that won’t cut it in the postseason and depth will become a major issue.

You should expect the Warriors to get back to the NBA Finals and people are already talking about 74 wins as a possibility, but let’s hold our horses to see what else the Warriors do in the offseason to fill out the rest of the roster.

Moving to the other side of this signing, the Oklahoma City Thunder immediately drop in the Western Conference standings. They might be able to pull off a 6th or 7th seed, but won’t be nearly as good a team as they were in 2015-16. The Thunder did help themselves with the Victor Oladipo trade at the NBA Draft, but he is not exactly Durant.

RELATED: Did the Magic just get fleeced by the Thunder with this draft trade?

With Durant moving on out that also could signify Russell Westbrook getting out of OKC next season when his contract runs up as well with a potential rebuild on the horizon. The Thunder still have nice pieces in Westbrook, Enes Kanter, Steven Adams and a promising young talent in Domantas Sabonis.

However, the small forward situation is pretty scary with seemingly no one to play that position other than Anthony Morrow right now. The Thunder will have some experimenting to do with big lineups that feature Kanter, Adams and maybe even Mitch McGary on the court at the same time.

There’s one thing you can count on from the Thunder and that is the most fiery, competitive Westbrook you have ever seen. This season is going to be his Godzilla, earth-shattering, rim destroying MVP campaign. He’s going to play with so much fire that his shoes might actually catch fire on his way to the rim for a fastbreak-ending dunk. Don’t be surprised if Westbrook becomes the do-it-all guy for the Thunder this year and steals an MVP award from LeBron James or Curry.