Whether he likes it or not, Westbrook’s free agency starts now 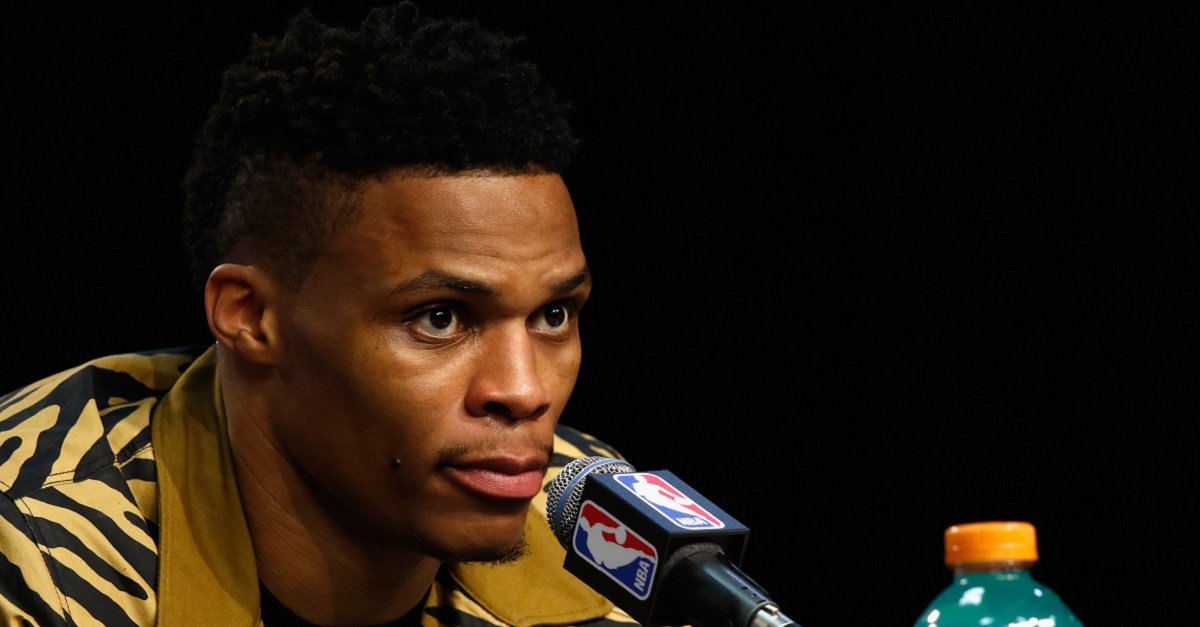 OKLAHOMA CITY, OK - MAY 28: Russell Westbrook #0 of the Oklahoma City Thunder looks on during a press conference after the Golden State Warriors defeated the Oklahoma City Thunder 108-101 in game six of the Western Conference Finals during the 2016 NBA Playoffs at Chesapeake Energy Arena on May 28, 2016 in Oklahoma City, Oklahoma. NOTE TO USER: User expressly acknowledges and agrees that, by downloading and or using this photograph, User is consenting to the terms and conditions of the Getty Images License Agreement. (Photo by J Pat Carter/Getty Images)

Russell Westbrook isn’t supposed to be a free agent until next summer, but Kevin Durant’s decision has moved up the time table by a year. The Oklahoma City Thunder would love not to trade their star point guard, but also don’t want to be left hanging should he decide to bolt next year in free agency. That would be two superstars lost in the course of a year and the Thunder cannot afford a teardown of that magnitude.

RELATED: Westbrook might have just given fans a huge hint about his free agency next year

While it’s been a growing rumor that Durant left because of Westbrook’s style of play, he has publicly said that isn’t the case. However, he failed to call Westbrook before he made his decision to become a member of the Golden State Warriors for whatever reason. Whether Durant left because of Westbrook or not, the Thunder now must make the point guard a top priority before the season begins in late October.

The Thunder rescinded the offer to Dion Waiters and he’s now a member of the Miami Heat, which frees up the Thunder to aggressively renegotiate Westbrook’s contract. They can now get him up to the max of $26.5 million per year, an increase from his current $17.7 million per year.  So while the rising cap would allow Westbrook to make more per year if he were to wait until free agency, with the lower projections, it wouldn’t be as much as he’d make overall with close to an extra $9 million in his pocket that he otherwise wouldn’t have.

So it would not only benefit the Thunder to sign Westbrook this summer, but it would potentially benefit him more as well to insure he makes that top dollar rather than wait a year and potentially lose some of that max deal money. It would also give the Thunder an idea of what they need to do keep him happy and they can start coming up with trade ideas to float out there before the February trade deadline next season.

It all comes down to what Westbrook is thinking and wants from the organization. He’ll never make this a public ordeal though and isn’t a guy to give us media speak while doing something completely different. Whatever happens he’ll make sure it doesn’t come out until it’s a done deal and he’s gotten what he wants out of all this.