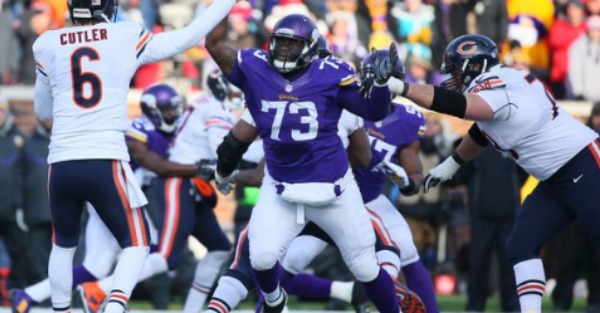 Sharrif Floyd, a defensive tackle for the Minnesota Vikings, has suffered complications from knee surgery and now his career is in jeopardy, according to a report in USA Today.

Floyd, 24, had knee surgery in September on his meniscus, but the nerve that controls his quadriceps hasn?t healed, USAToday reported.

Floyd?s agent wouldn?t address the report, and Floyd has only vaguely referenced the situation:

My 🙏🏽 to the big guy #upabove we've been on this train 🚂 for so long, you have blessed me in more why's then I could've possibly imagine. For that I I'm truly thankful. You've been there when there was no one around, you've held me together when I thought I was at my edge, you've aloud me to play a game that kids dream about to this day. For that I continue to place my hands together 🙏🏽 I come to you tonight that same kid in 2006, not moved by greed, not moved by negativity, not moved in bad behavior. I'm down on one knee praying my road doesn't end here…. there are so many more lives to touch, so much more joy to spread. You've believed in me for to long to turn your back on me now. Don't let me go out this way. All I ask is for a fighting chance… this game means so much to me and the foundation is still being laid one stone 💎 at a time. I'm hurting and I don't know how to say it aloud, I am truly humbled in your grace. Grant me one last run, I promise I'll lay my soul on the line. #humbleandhungry #215raisedme #begreat73 #savagelife #unlockthecage #notdoneyet #cametofartogiveup #watchmework #pleasedoubtme #level40training

Floyd has suffered from knee problems throughout his career. He had a minor procedure on his  knee during rookie camp in 2013 and missed four games due to knee issues in 2015. He?s had 9.5 sacks and 57 tackles during his young career.