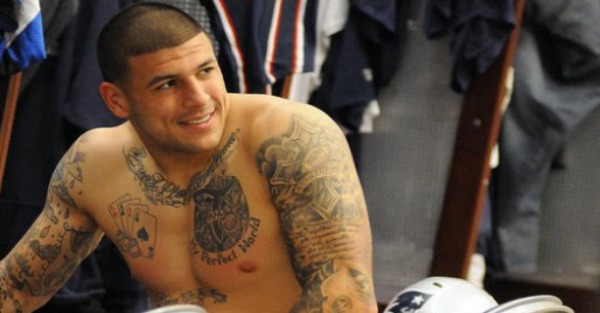 That’s what Aaron Hernandez called a fellow inmate he wanted to bunk with, according to one of five new letters released by corrections officials that were written during the former football star’s stay at the Souza-Baranowski Correctional Facility.

In a request a new cellmate, Hernandez wrote: ?So, please make this happen and I even prefer to move in with (redacted); me and him are very close and have been since the streets and that?s FACT, not bulls–t. He?s my heart and like a real brother to me that?s why I want and am requesting to go upstairs and live with him.?

In another letter, which was redacted by prison officials, he wrote:

In the letters — all of which can be read here — Hernandez consistently makes pleas to be placed in an environment in which he feels comfortable. He requested to be moved to one  cell block because, “?There are two people I know from the streets who I?m close with.? In another letter, he wrote he was “pleading” for prison officials to move  him.

It’s important to note that there’s little other context here beyond what prison officials say Hernandez wrote. Since all inmates names have been redacted it’s impossible to tell who he was referencing in the “my heart” comment, and what that really means. Hernandez has been dogged by rumors that he’s bisexual and had a prison lover, but his finance has denied those claims.

Hernandez was serving a life sentence in prison for killing his friend Odin Lloyd when he committed suicide shortly after being found not guilty in a double murder.