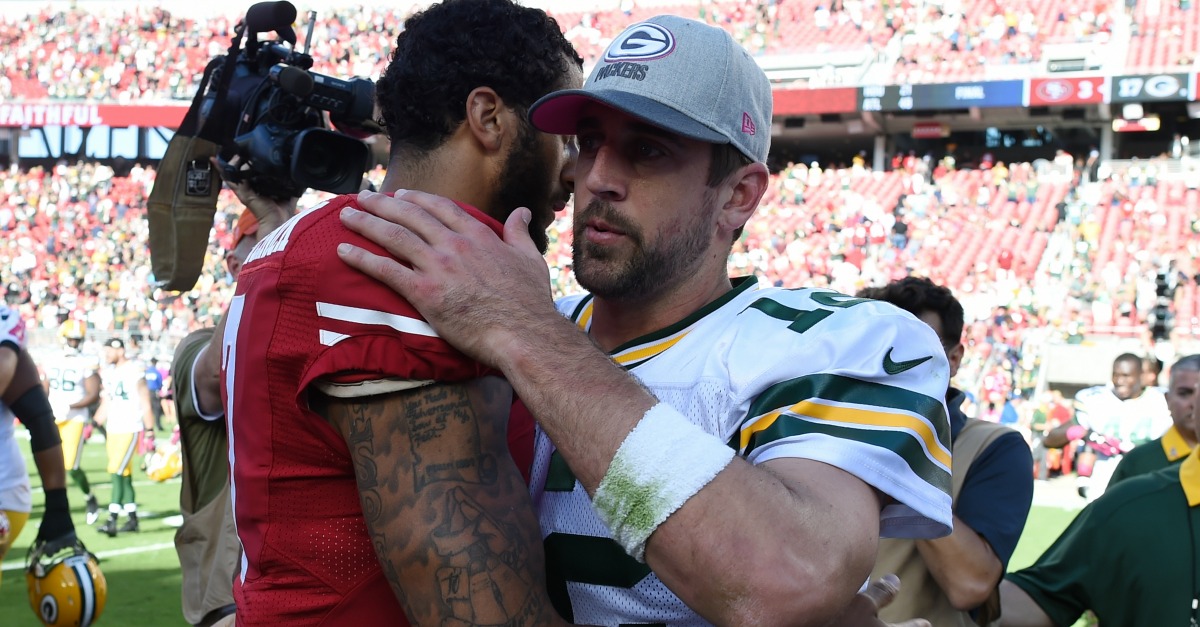 during their NFL game at Levi's Stadium on October 4, 2015 in Santa Clara, California.

Green Bay Packers quarterback Aaron Rodgers believes Colin Kaepernick’s protests — not his on-field play — are what’s keeping him from being signed by an NFL team.

?I think he should be on a roster right now,? Rodgers told Mina Kimes of ESPN The Magazine. ?I think because of his protests, he?s not.?

Rodgers also expressed his opinions about players protesting during the national anthem during the interview.

?I?m gonna stand because that?s the way I feel about the flag ? but I?m also 100 percent supportive of my teammates or any fellow players who are choosing not to,? Rodgers told Kimes. ?They have a battle for racial equality. That?s what they?re trying to get a conversation started around. . . . I don?t understand what it?s like to be in that situation. What it is to be pulled over, or profiled, or any number of issues that have happened, that Colin was referencing ? or any of my teammates have talked to me about. . . . But I know it?s a real thing my black teammates have to deal with.?

?As far as his prospects as a backup, I don?t think he is being blackballed in terms of rich white owners saying, ?We are not hiring this guy,?? said one defensive coordinator. ?I think coaches are like, ?Look, if this kid is not starting for us, why are you bringing in distractions not for a starter? We have a pretty good sort of locker room and mesh here. What is the risk-reward?? I don?t think anyone is to the point of making him the starter, and that is the bubble he is getting caught in.?

There are also executives concerned about his natural abilities and how he fits into modern NFL systems.

?I like the arm strength and I like the athleticism, but the worst thing that happened with him was when people tried to make him a pocket passer,? said one personnel director. ?He is much better when he can waggle or boot and do some of those things.?

All things considered, some NFL coaches do believe that Kaepernick will be back in the league eventually, although they may not know when that will be, one executive told Sando.

?I do not think he is done,? claimed one head coach. ?I think he can still play. He is awkward. People want a certain look.?