According to anonymous NFL GMs, this talented defender’s career is likely over 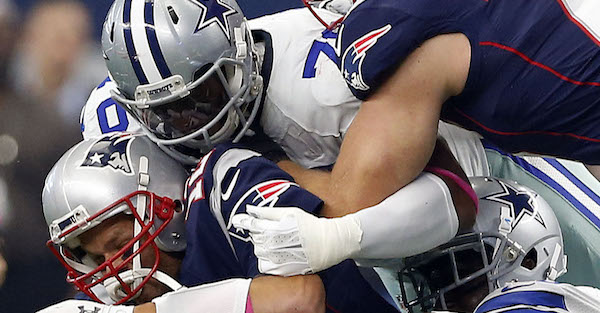 ARLINGTON, TX - OCTOBER 11: Quarterback Tom Brady #12 of the New England Patriots is sacked by defensive end Greg Hardy #76 and Rolando McClain #55 of the Dallas Cowboys in the first quarter at AT&T Stadium on October 11, 2015 in Arlington, Texas. (Photo by Christian Petersen/Getty Images)

The Dallas Cowboys took a chance on talented, but trouble defensive end Greg Hardy last season, and they’ve reportedly backed away from any interest in bringing him back.

Aside from the organization and his teammates turning on him,  Hardy had plenty of off-field issues including his Twitter fiasco and a domestic violence incident in which he was found guilty.

After a disastrous season in Big D, NFL general managers are reportedly wary of bringing him in:

Solicited #NFL GMs on Greg Hardy. Most praised @RosenhausSports for his efforts. But prevailing opinion: "Greg Hardy? Nobody wants him.''

Another GM on Hardy said ownership would be involved. "Maybe…Many will probably steer clear to err on the safe side."

Third GM on Greg Hardy: "Going to be a very hard sell moving forward. There's too much of an allusion towards cleaning up for sake of sale."

Despite Hardy’s agent, Drew Rosenhaus backing him and releasing therapy notes to other teams, it appears other teams aren’t as willing, or desperate as the Cowboys were.