Adrian Peterson to undergo surgery, here’s how long he could be out 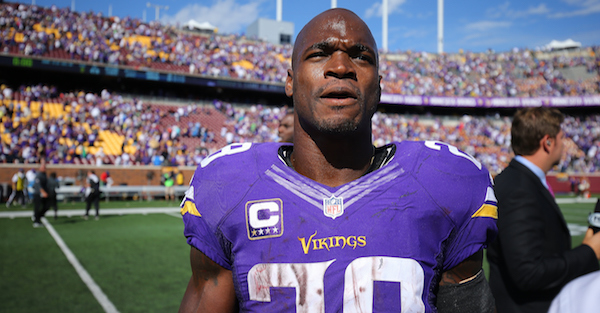 According to Josina Anderson of ESPN, Vikings running back Adrian Peterson will undergo surgery on Thursday to repair a torn meniscus in his right knee.

#Vikings RB Adrian Peterson told me he's planning to have surgery on Thurs to repair his meniscus. He's "doing it with faith and optimism."

The wording on the surgery is critical; it appears that Peterson is going with a full repair in surgery over what is known as a “trim” to the meniscus. Peterson probably could have been back in a month with the latter procedure, but a full repair will likely keep Peterson out for at least three to four months. It’s possible that he’s out for the season and the playoffs this year.

Peterson has what is known as "bucket handle tear." I'm told that's a minm of 3-4 months out & up 6months usually. Again Peterson has faith.

Peterson has been one of the best — if not the best — running back in the NFL since he was drafted out of Oklahoma in 2007. Now 31, Peterson is on the decline of his career, and this surgery definitely doesn’t inspire hope that Peterson will regain the explosive form that once dominated the league.

The injury is just another blow for the Vikings, who have already lost starting quarterback Teddy Bridgewater to a devastating knee dislocation. The good news for Minnesota, though, is that they are still 2-0 on the season, and their trade for Sam Bradford doesn’t look as bad now as it did several weeks ago.

The Vikings play their next game on Sunday at Carolina.