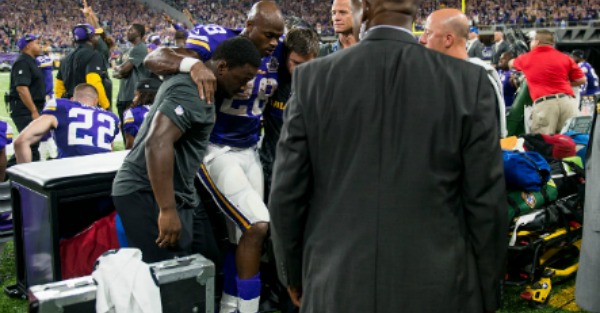 For the first time in his stellar career, the “d” word is being uttered about Adrian Peterson.

And decline isn’t a word that gets tossed around freely in the NFL, particularly in regard to some of the best players in the league. But after two games, Peterson’s put up just 50 yards on 31 carries. And as ESPN’s Adam Schefter points out, he’s averaging just 1.6 yards per carry so far this season, the worst yards per carry average of any player with at least 30 attempts since 1970.

Peterson suffered a knee injury in the third quarter of Minnesota’s thrilling 17-14 victory over Green Bay Sunday night, which obviously cut into his total, but through three frames, he was still averaging about 1.5 yards a carry.

Peterson’s scheduled to get an MRI Monday on the knee but according to reports, he’s already up and walking on it without crutches.

I can't believe the Vikings have to walk Adrian Peterson through a restaurant to get to the locker room pic.twitter.com/otjYbrEhGT

Regardless of the slow start, a sidelined AP would be bad news for the Vikings. The next two backs on the depth chart, Matt Asiata and Jerick McKinnon, have 35 yards on 13 carries between them on the season.