After dismal first year, Eagles reportedly willing to move on from star signing 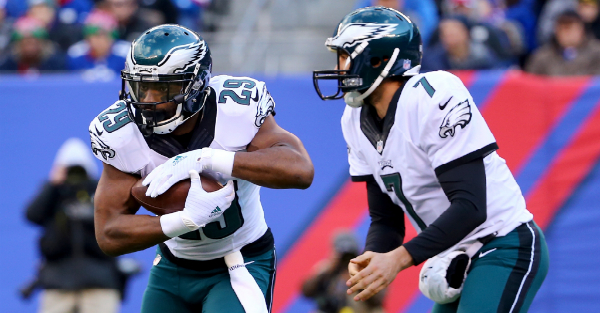 EAST RUTHERFORD, NJ - JANUARY 03: Sam Bradford #7 of the Philadelphia Eagles hands the ball off to DeMarco Murray #29 against the New York Giants during their game at MetLife Stadium on January 3, 2016 in East Rutherford, New Jersey. (Photo by Al Bello/Getty Images)

After back-to-back years of rushing for more than 1,000 yards for the Dallas Cowboys, DeMarco Murray cashed in for a five-year, $40 million deal with the division-rival Philadelphia Eagles.

After rushing for just 702 yards in a dreadful year with the Eagles, Philly is reportedly eyeing moving the disgruntled back.

The message teams are receiving this week: DeMarco Murray still not happy in Philly. Trading him will be difficult, but #Eagles will listen.

With four years remaining on his deal, it will certainly be difficult to move him. One team that could be interested despite his bloated salary is the Cowboys.