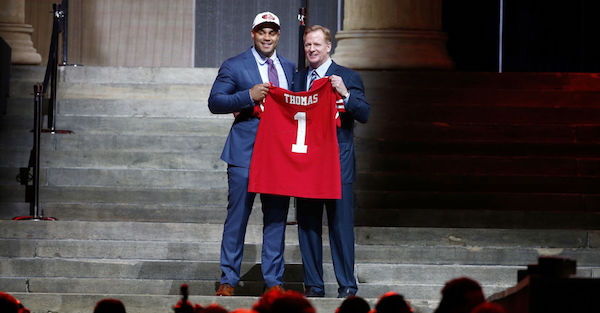 Jeff Zelevansky/Getty Images
PHILADELPHIA, PA - APRIL 27: (L-R) Solomon Thomas of Stanford poses with Commissioner of the National Football League Roger Goodell after being picked #3 overall by the San Francisco 49ers (from Bears) during the first round of the 2017 NFL Draft at the Philadelphia Museum of Art on April 27, 2017 in Philadelphia, Pennsylvania. (Photo by Jeff Zelevansky/Getty Images)

The Chicago Bears made the first of many shocking moves in the first round of the NFL Draft when they traded up one spot from No. 3 to No. 2 to select quarterback Mitchell Trubisky.

Chicago traded with the San Francisco 49ers, and the 49ers received the Bears’ first round pick in 2017, third round picks in 2017 and 2018, and a fourth round pick in 2018. The 49ers selected defensive end Solomon Thomas with the No. 3 overall pick.

Trading back one spot and getting three additional picks was a shrewd move for new 49ers general manager John Lynch. The 49ers’ Twitter account had some fun with the Bears by tweeting a picture of Thomas coming after Trubisky during Stanford’s win over North Carolina in the Sun Bowl last year.

Following a trade with the Bears, the #49ers selected Stanford DL Solomon Thomas with the 3rd overall pick.

Related: The 49ers fleece the Bears, who make the first stunning pick of the draft

The 49ers were probably going to take Thomas anyway, so the fact that they gained three additional picks makes the Bears look pretty bad.

If Trubisky turns out to be an elite QB, then maybe the Bears get the last laugh. But for now, this doesn’t appear to be a good trade for Chicago.