After getting crushed by Trent Dilfer, Colin Kaepernick fired back, and he makes sense 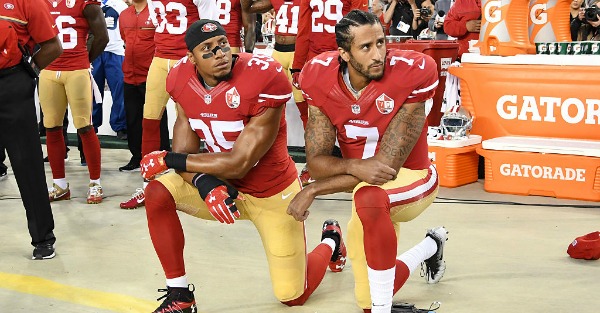 Colin Kaepernick continued his protest Monday in the 49ers season opener against the Los Angeles Rams, and afterwards took aim at ESPN analyst Trent Dilfer for hurling what he called “ridiculous” accusations against him.

Dilfer’s comments, in which he claimed Kaepernick’s national anthem protest has “torn at the fabric of the team,” came Sunday during ESPN’s pregame show.

?No matter how passionate you are, no matter how much of a burden you have (sic) for a social issue, you don?t let it get in the way of the team,” Dilfer said. “The big thing that hit me through all of this is that this is a backup quarterback, whose job is to be quiet, and sit in the shadows, and get the starter ready to play week 1.?

Needless to say, Kaepernick didn’t take too kindly to Dilfer’s critique, calling it one of the most “ridiculous” things he’s ever heard.

“I think that?s one of the most ridiculous comments I?ve heard,” Kaepernick told reporters following the 49ers’ 28-0 victory. “The fact (Dilfer) says, ‘You are a backup QB, stay in your place.’ That?s an issue. To me, you are telling me that my position as a backup QB and being quiet is more important than people?s lives. I would ask him to really have a conversation with the families of people that have been murdered and see if he still feels that way. Because I bet that he doesn?t, just because he hasn?t experienced that type of oppression. I hope he goes home and really thinks about what he said and how it impacts not just (him) but how it impacts people whose lives are affected by these issues on a daily basis.”

Kaepernick, who says his protest is to call attention to the police brutality and racial injustices suffered by people of color in the country, has been taking a knee while the national anthem is played before games. Kaepernick’s protest continued before Monday night’s game with teammate Eric Reid kneeling along with him. Teammates Antoine Bethea protested by raising their fists, as did Los Angeles Rams players Kenny Britt and Robert Quinn.

RELATED: This call of the man who ran onto the field during MNF is classic

Contrary to Dilfer’s claims that Kaepernick’s actions have had a negative impact on the 49ers organization, several players have reportedly said that his stance has brought the team together. Kaepernick has also received an outpouring of league wide support, which he says drives him to continue on with his agenda.