After rough start, second-round kicker turning his season around to win NFC award 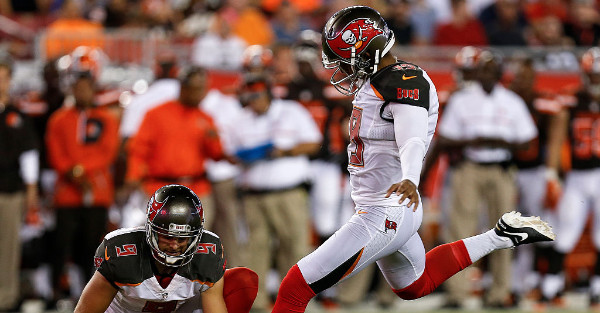 Ironically, however, Roberto Aguayo, who began the season as one the league’s worst, was the week’s best, connecting on all four of his field goal attempts and nailing his only PAT in Tampa Bay’s 19-17 road victory over the Kansas City Chiefs.

The second-round pick out of Florida State was successful on field goals of 41, 36, 31, and 22 yards on his way to being named NFC Special Teams player of the week.

It was quite the contrast from a career that came close to being snuffed out before it even began. Aguayo looked to be headed for the door after missing a handful of field goals and PAT’s in his first two preseason appearances, and rumors began swirling that he might not even make the Bucs roster.

RELATED: What the hell is Jameis Winston doing?