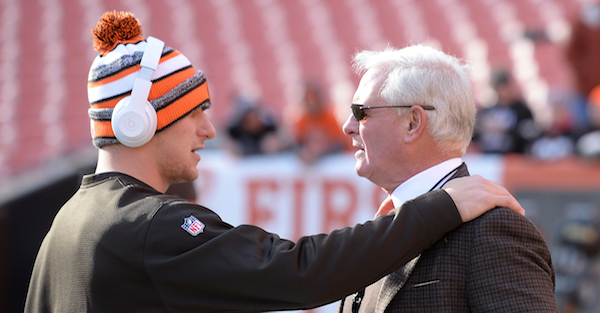 At 0-10 and steamrolling towards a winless 2016 finish, it’s surprising that the Cleveland Browns haven’t fired some coaches yet.

But, according to the latest rumblings, that could be about to change. After quarterback Cody Kessler was benched in the second half of Cleveland’s 28-7 loss to Baltimore Thursday night, friction between the team’s brass and the coaching staff has reportedly escalated to the point where a shakeup now looms.

CBS’s sources reportedly say defensive coordinator Ray Horton could be facing the brunt of it. The offense is no powerhouse, averaging 17.5  points a game for the league’s 27th rank, but the problem lies with a defense that’s surrendering 30.1 per outing. And with owner Jimmy Haslam and his wife, Dee, now reportedly doing a good amount of the club’s decision-making, tensions are running high.

“You basically have a husband and wife in charge of various areas they don’t really understand — football, coaching, scouting, analytics, ticketing, marketing,” a team source said. “And that’s the way they want it.”

And Haslam, who’s been no stranger to cleaning house over the years—he’s fired three coaches and general managers in the past four years—looks on par to start doing so again.