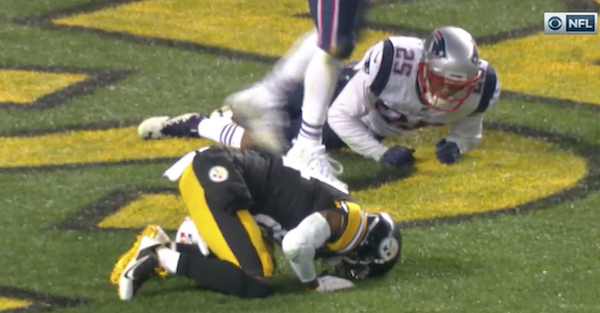 Antonio Brown and the Pittsburgh Steelers are on the mend after a brutal leg injury forced him out of his team’s tilt with the New England Patriots.

After he was taken to the hospital, it was discovered the wideout had suffered a partially torn calf muscle. He’s expected to miss the rest of the regular season, but return for the playoffs:

Steelers WR Antonio Brown has a partially torn calf muscle, per source. Unlikely to play next week but expected back for the postseason.

Brown crossed across the middle of the end zone as he suffered hits from both sides attempting to catch the touchdown, and his leg snapped into a defenders shin.

He was helped off the field and couldn’t put weight on the leg as he approached the sideline. After being taken to the medical tent, Brown was able to walk on his own back to the locker room.

The Steelers fell to the Patriots, 27-24, after quarterback Ben Roethlisberger threw an interception from third-and-goal with just five seconds remaining in the game.