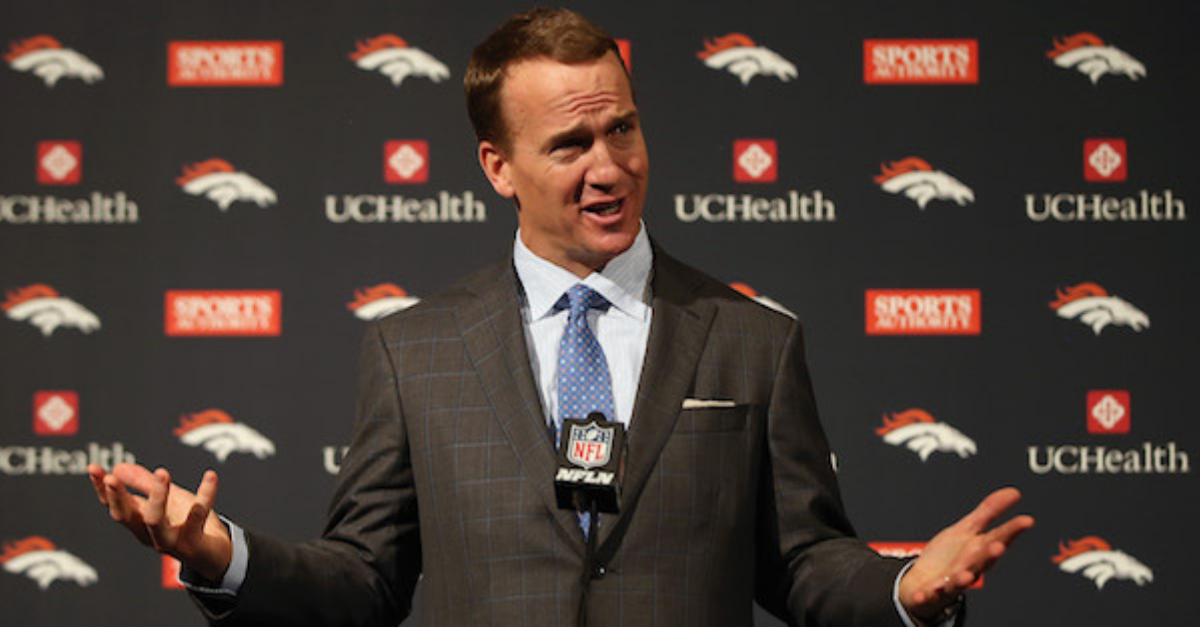 NEW YORK (AP) ? Just as he had the true touch when he threw passes, set records and won two Super Bowls, Peyton Manning has the right approach when looking at some of the NFL’s greatest moments.

ESPN, NFL Films and the league itself clearly felt that way.

Manning, a lock for the Pro Football Hall of Fame when he becomes eligible in 2021, is hosting and serving as an executive producer for “Peyton’s Places,” a five-part, 30-episode series celebrating the NFL’s 100th season. The show debuts on ESPN+ in July, with ESPN and ABC airing special compilations.

For the quarterback, it was a labor of love, a journey into pro football’s past that was educational, humorous and heartfelt.

“NFL Films has been great throughout this and they approached me about doing it to tell the story of the past 100 years,” Manning says. “They certainly had a template and blueprint they wanted to tell, and we had certain people we wanted to talk to and visit and have conversations about how football got started.”

The series will be five chapters – each consisting of six episodes.

It will debut on July 15th.

So Manning dived all the way back to Ralph Hay’s Hupmobile showroom in Canton, Ohio. He spent time with members of the undefeated 1972 Dolphins; rewatched Super Bowl 3 with Joe Namath; discussed the Immaculate Reception with Steelers and Raiders to get the Pittsburgh and Oakland viewpoints; and discovered intriguing connections to the NFL for Richard Nixon, Jay Leno and Elvis.

“We got to go down memory lane,” Manning says. “I have always loved the history of the game and I have learned a lot during this journey, and spent some time with some of my favorite players and contemporaries of my dad (former Saints star quarterback Archie Manning) and guys he looked up to.

“NFL Films has all this great archives of (Bears founder) George Halas talking about being in Ralph Hay’s Hupmobile showroom, (Giants owner) Wellington Mara talking about how Vince Lombardi wanted him to take Polaroids and throw them down to the field when Vince was coaching with the Giants. To maybe re-enact it or kind of tell that story, it’s kind of why I signed up for it.”

Along the way, Manning channeled his inner comedian, as displayed in TV commercials and as host of “Saturday Night Live.”

A big fan of Elvis Presley, Manning visited Graceland and “may or may not” have dressed up in an Elvis costume. He did discover that Presley staged impromptu games at local parks and was such a die-hard NFL fan he had three television sets on hand so he could watch as much football as possible.

“He got the idea from Lyndon Baines Johnson, who had three TVs so he could watch the news and political news coverage,” Manning explains.

Manning and Cris Carter also tried to replicate a stunt the New York Giants performed at the O’Keeffe Radiator Building in Manhattan ? now the American Radiator Building. In 1926, the Giants’ Lynn Bomar threw a ball to the ground from 324 feet up on the 23-story building, and Hinkey Haines caught it.

“Back in the ’20s, the forward pass was like a circus act,” Manning says. “When you were in the red zone and threw a pass into the end zone and it was incomplete, the other team got the ball; that was news to me. Clearly, teams didn’t want to throw it.

“But to get some buzz and interest with the team not drawing well, the Giants did this publicity stunt and had (Bomar) throw a pass off the building. So I threw a pass down to Cris Carter at the same spot and he caught it. It was pretty neat.”

Also neat, no doubt, was having Manning service motorist’s cars at the Vince Lombardi Travel Plaza on the New Jersey Turnpike. Manning dressed up as an attendant and “would give them a lecture or seminar on Vince Lombardi” while they were gassing up. The customers were given $10 off their bill if they could correctly answer questions about Lombardi.

Paying homage to one of the NFL’s great QBs, Sammy Baugh, who also played safety and was an All-Pro punter, Manning had Deion Sanders “try to teach me” to play defensive back. “That provided some challenges,” Manning says with a chuckle.

He visited with Jay Leno, a renowned classic car collector, to discuss the Hupmobile, an auto on which several future NFL franchise owners sat (on the running boards) “drinking prohibition beer” as the league was formed.

“I hope people who love football will find it entertaining,” he says. “I certainly have not been afraid to make fun of myself.”

The fun of the series is accompanied by a reverence for the history of his sport. Such highlights as sitting with Roger Staubach and watching the long pass to Drew Pearson that spawned the “Hail Mary” description of such plays. Or chatting with Jim Brown about his career ? in football and lacrosse and acting. Or researching the role of Bert Bell, the league’s second commissioner who created the draft, scheduled games for Sundays ? college football, more popular in the those days, owned Saturdays ? and insisted on blackouts when television became a factor.

“Bert Bell made a bad investment, putting his money in a pro football team, guys in leather helmets running into each other,” Manning says with a sarcastic laugh. “Bert Bell was a pioneer.”

Bell and Nixon likely wouldn’t have gotten along. Nixon, as Manning discovered, was so annoyed he couldn’t watch the Redskins’ home games from the White House during his 1969-74 administration that he asked NFL Commissioner Pete Rozelle to lift the blackouts.

“Rozelle refused, saying it would hurt attendance,” Manning says. “So, basically, Nixon got Congress to pass a law to end the blackouts. He called it one of the greatest achievements of his administration, and that shows you how important it was to people who wanted to watch their teams. And still is.”