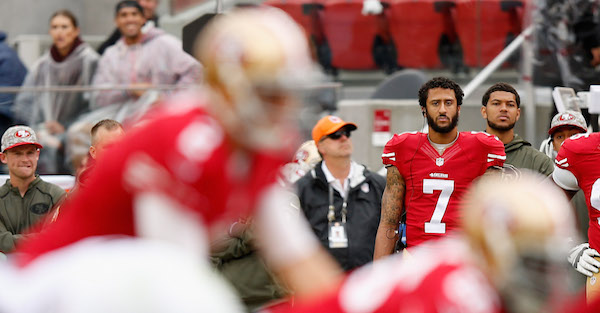 San Francisco 49ers quarterback Colin Kaepernick is making national waves since he refused to stand for the National Anthem. It’s sparked quite the controversy with everyone chiming in to offer their opinion on Kaepernick’s refusal to stand.

RELATED: Colin Kaepernick is so toxic the 49ers may decide to take this drastic action

African American Army Ranger veteran Dorian Majied offered his thoughts on Kaepernick, but was far less aggressive than that of Boone.

“I understand Kaepernick?s intention, however I disagree with his means. His NBA counterparts protested the same ideas in a way that neither hurt the country, nor ignored the ideals that people of color have fought and died which; ideals represented by the symbolism of the American Flag and words of the National Anthem.”

Majied offered what he thought were better ways in which Kaepernick could continue his protest, including, making public statements like Carmelo Anthony did at the 2016 Olympics or writing a letter to his congressman.

?To refuse to stand for the National Anthem is his right as an American, and I support that right, however I do not agree with that action,” Majied said.

“He made valid points, I?m not ignoring that there are still issues with race in America. However, he is ignoring the positive ideals of America that every colored person who has ever served, fought?while some died?for, by refusing to stand. Proper action is exactly that, action, not the inaction of not standing because he couldn?t think of a better way to protest.?

Players such as Victor Cruz and Alex Boone have both spoken out against Kaepernick?s decision. Michael Bennett of the Seattle Seahawks has also spoken out as a supporter of Kaepernick in the sense that his speaking out is, ?what makes America great.?

It doesn?t sound like Kaepernick plans to change his stance anytime soon. Although the distraction he?s caused could eventually push him out of the NFL.