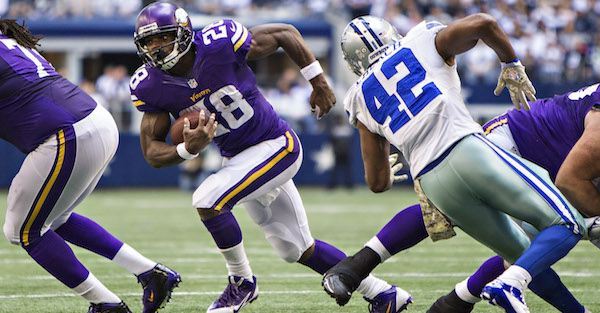 Adrian Peterson is ready to hit the open market, and he’s already got at least one NFL contender looking his way.

Peterson previously hinted at possibly landing with the Giants, paying attention to the free agency moves they’ve already made:

The Giants been making some interesting moves.

The Giants recently released Rashad Jennings, essentially opening up a starting running back spot for only the only backs on the roster, Paul Perkins and Shane Vereen.

According to ESPN, if Adrian Peterson isn’t brought back to Minnesota, he would consider joining the Tampa Bay Buccaneers, Giants or Houston Texans. And according to the report, the Cowboys “could be in play” as well.

Peterson’s 2016 season was cut short after suffering a torn meniscus in just his second game. He’s won the NFL rushing title three times in his career, including in 2012 when he rushed for 2,097 yards.

The Green Bay Packers are the favorites to land Peterson, according to BookMaker.eu. The Packers are +200 for Peterson, and the Vikings are +250 to retain him.

Peterson has faced the Packers 17 times, and he averaged nearly 105 yards per game and scored 14 touchdowns.

On the Jerry Jones front

If Adrian Peterson was free, source said #Cowboys owner Jerry Jones would pursue him to pair with Zeke Elliott. He'll be free on 3/9 🤔🤔🤔

Ezekiel Elliott led the NFL in rushing in 2016 as a rookie, and Peterson led the league in rushing the year before. Unless Peterson would play for a lower salary, the pairing of Dallas and Peterson might not be an ideal match despite Jerry Jones’ desire to bring him in.

If Peterson was fine with being the backup running back and making less money, the move might make sense for the Texas native. But if Peterson wants to be a starter and/or wants a high salary, he’ll probably be forced to look somewhere other than Dallas.

CBS Sports’ Jason La Canfora questions in a recent column that details how the former standout running back simply isn’t in a position to demand big-time deals any longer and how he may have to settle for a bargain deal.

“Could the Patriots make a value play for Peterson (LeGarrette Blount is a free agent)? It fits their model, but I’m not sure the tape would spur Bill Belichick to make that move, as much as he loves to get veterans on the cheap late in their careers.”

He is a former MVP, seven-time Pro Bowler and four-time All-Pro, with a 2,000-yard season under his belt. Could he have a career revitalization in New England a la Randy Moss? Nothing is for sure, but we’d be willing to bet he’d have another standout year behind the greatest of all-time.