The Atlanta Falcons are a team that, when looking at the roster, really isn't good. Sure, they have some playmakers, but as a whole, their roster stinks. Really, there are only about four players on the roster that deserve any sort of attention: Kyle Pitts, Drake London, A.J. Terrell, and Younghoe Koo. Yep, one of their most notable players is their kicker. That's how bad things are in Atlanta right now as training camp begins to wrap up.

However, with that said, there are some position battles -- specifically on the offensive side of the ball -- that could bring some more notable players to the forefront.

First up, the quarterbacks. 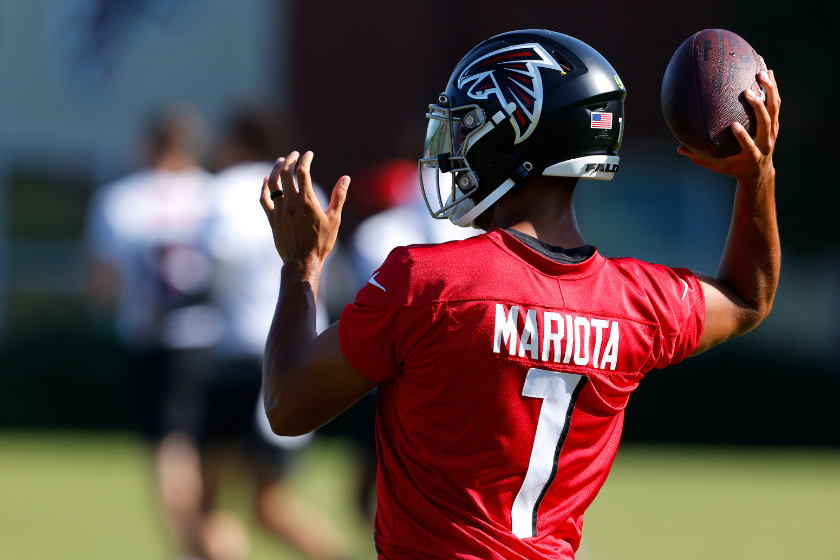 Head coach Arthur Smith has a big decision to make this season, and that's deciding between two question-mark quarterbacks. After dealing Matt Ryan to the Colts in the offseason and failing to acquire Deshaun Watson, the decision for Falcons signal-caller is between the 2015 No. 2 overall pick, Marcus Mariota, and rookie quarterback from the University of Cincinnati, Desmond Ridder.

Thus far in Mariota's career, he's been lackluster, especially for a former No. 2 overall pick. With 74 games under the former Oregon Duck's belt, he's 29-32 with a 62.8% completion percentage, 13,437 passing yards, 1,574 rushing yards, 90 TDs (77 passing, 13 rushing), and 45 INTs. On paper, Mariota's career hasn't really been that bad. That said, it's probably not how the Titans would've liked it to go. He spent five years as a Titan, and then left for Vegas for the last two seasons, where he spent most of his time behind a clipboard on the sidelines rather than behind an offensive line. That is, unless the Raiders wanted to run a designed quarterback run. Might as well let the backup take those hits, instead of the franchise quarterback.

Mariota's always been effective on his legs. His arm, outside his 2016 season, is where the question marks arise.

Is Desmond Ridder the Future in Atlanta? 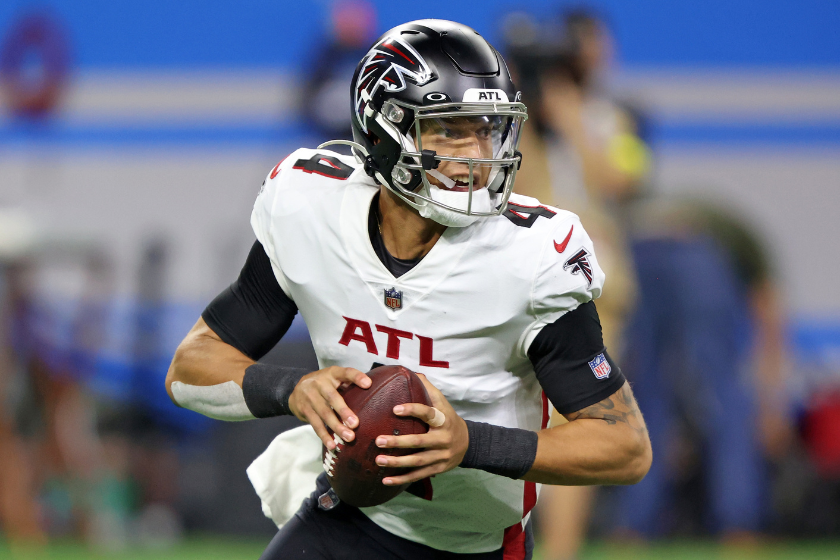 RELATED: Desmond Ridder's Mom Raised Him on Her Own & Helps Him Navigate Parenthood

Battling Mariota is the rookie from Cincy, Desmond Ridder. Being selected 74th overall in the 2022 NFL Draft, the expectations for him aren't nearly as high as they were for Mariota, however, Ridder might be the answer after all.

Coming into the draft, Ridder was an intriguing prospect, however, the level of his competition was a big strike against him. Ridder was a four-year starter at Cincy, and he finished his career with a 62.1% competition percentage, 10,239 yards, 87 TDs, and 28 INTs. With his legs, he was pretty impressive, too, given his size. Standing 6-foot-4 and weighing in at 215 pounds, Ridder ended his college career with 2,180 rushing yards and 28 rushing touchdowns. When looking at his stats, he was pretty steady his whole time as a Bearcat. His junior season, he missed a few games, but outside of that, he was just a consistent quarterback in the AAC. And that alone was enough to make him slip down the boards, though there were times that his stock was somewhere in the first round.

The AAC is a lot different from the NFL, however, there are plenty of examples showing QBs from smaller schools going off and doing some great things.

And the list goes on and on. The school a quarterback goes to doesn't dictate how well they do in the NFL.

Now, if Mariota doesn't show signs of being capable of this work anymore and Ridder shows promise, give the rookie a chance. Mariota's only on a one-year deal anyways, so having him be the backup this year wouldn't be a bad choice.

In Ridder's first NFL performance -- even if it was preseason -- he finished 10/22 with 103 yards and two touchdowns. Ridder also ran the ball six times for 59 yards. Mariota, while not given much time, was a perfect 2/2 with 36 yards and 23 yards on three rushes. Going 10/22 certainly isn't great, but he was rolling with the second, third, and fourth string receivers. The Falcons already have a lack of top-end talent, so that trickles down into the lower-string players, too.

The Falcons starting quarterback job, is really a toss-up. Regardless of the decision made, there really isn't a right answer. Both quarterbacks have question marks. That said, in terms of up-side, there's an advantage in Ridder's favor. 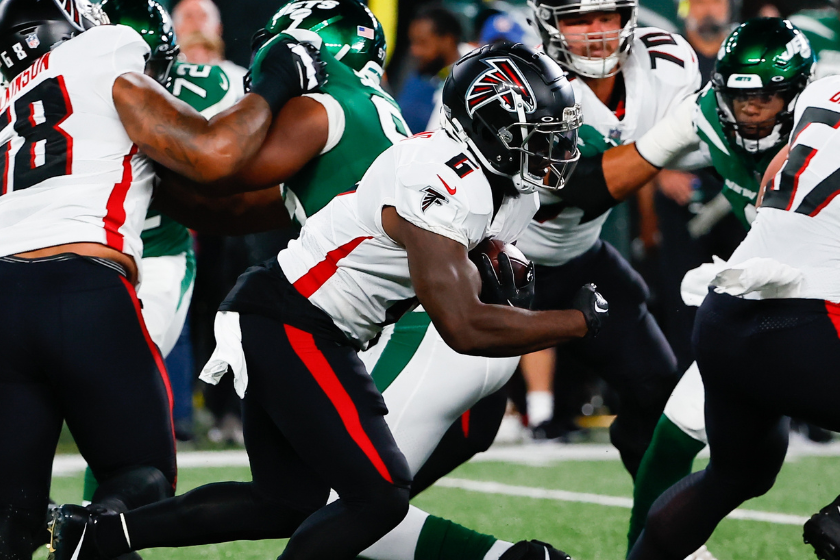 Now, time to look at the second personnel battle on the Falcons offense: the battle for the top dog in the running back committee.

As of now, the Falcons have the following players battling for a spot in the running back room:

While Cordarrelle Patterson had an impressive 2021 season, is he really the best running back on this roster?

In terms of who is battling for that RB1 spot, it's between Cordarrelle Patterson and Tyler Allgeier. Damien Williams is a more of a pass-catcher, and the last three guys are most likely depth pieces. So, while he's technically the second running back on the Falcons depth chart, it's unlikely that he's going to lead the backfield if something happens to Cordarrelle Patterson.

The battle between Patterson and Allgeier is an intriguing one, as the rookie could absolutely beat out Patterson. Standing at 5-foot-11 and weighing in at 220 pounds, Allgeier is about as prototypical of a running back as they come. Patterson, however, is a bit tall for a running back, as he stands 6-foot-2. You can see why he started his career as a wide receiver.

Patterson was also more of an offensive weapon than a running back last year. Now, don't get it twisted: he played running back, but he wasn't a true running back. His height makes him an easier target to take down, whereas Allgeier is a bit more compact.

Cordarrelle "Flash" Patterson got the name Flash because of how quick he is with the ball in his hand. That said, it takes more than a fast person to make a good running back in the NFL. It takes balance, vision, speed, strength, and a handful of other quirks to make a great back. Does Allgeier have all those traits? It's unknown as of now, given he only has one preseason game under his belt. 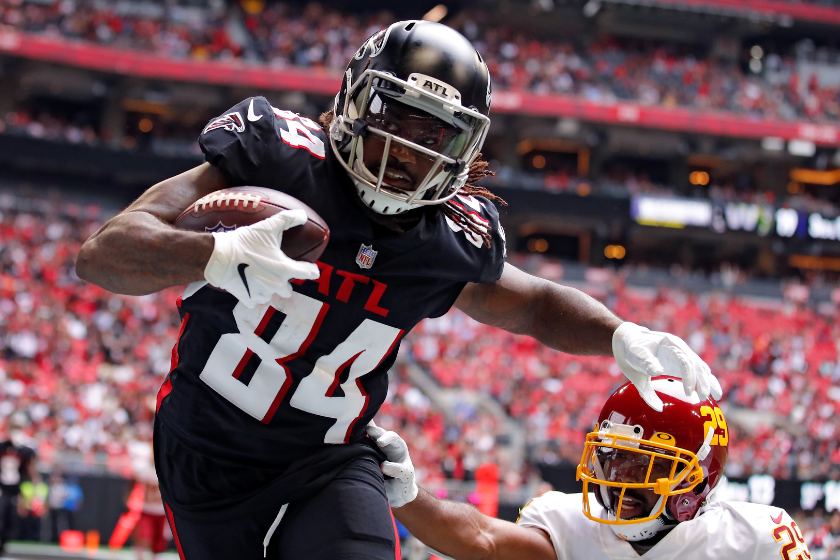 However, with Patterson going on year 10, was last season the best he can be? It's tough to tell, mainly because last season was a bit of an anomaly. Prior to last season's performance, the most rushing yards Cordarrelle Patterson had was 232 yards of 64 rushes. Last season, Patterson rushed for 618 yards on 153 rushes, so it's clear to see that this wasn't an ordinary year for the dynamic return-man.

Along with his performance on the ground, Cordarrelle Patterson had his career-best season receiving. In 2021, Patterson caught 52 passes for 548 yards and five TDs. Prior to last year, though, his best season in terms of receiving was his rookie season, where he caught 45 passes for 469 yards and four TDs -- and even that season is a bit of an anomaly compared to the rest of his career. All-in-all, Cordarrelle Patterson is neither a top-end running back, nor is he a top-end receiver. He's average-to-above average at both, but if Arthur Smith wants to keep his job, he's going to need more than average.

Given the Falcons' current roster, there aren't many players in that "above average" category, however, if Tyler Allgeier is who the Falcons think he might be, there's a good chance that he beats out Flash for the starting running back position.

So, while the Atlanta Falcons have a lot of holes to fill, two rookies drafted this year could step up and help Arthur Smith save his job, as well as remove the Falcons from the basement of the NFC South.

MORE: Devin Hester is the GOAT Returner of the NFL, Not Cordarelle Patterson