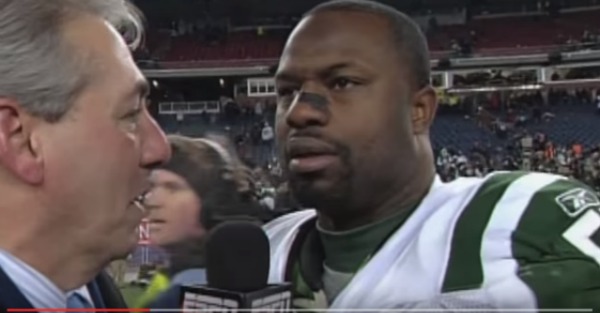 Bart Scott’s frightening tirade after his New York Jets defeated the New England Patriots in 2011’s AFC Divisional Playoff game still ranks up there as one of the most entertaining post-game interviews ever. Although, ESPN’s Sal Paolantonio, who conducted the interview, would probably disagree.

Scott, who now works as an analyst for CBS Sports, apparently has yet to regain his sanity.

In an appearance Wednesday on CBS Sports Radio’s The DA Show with Damon Amendolaram, Scott was still every bit as malicious as he was in his playing days when he talked about Odell Beckham Jr.

“You go out there with all that tough guy stuff, if he tried to come at me…whether the cameras watching or the refs watching I would choke the hell out of Odell Beckham if he came here with that. I’ve choked plenty of players…,I put Jake Long in a reverse arm bar cause he had elbow surgery…He ain’t even in this weight class…I’m used to dealing with 350 pound guys. You wanna come in here and be in this weight class, you’re leavin out differently than you came in. Get that helmet off I’ll grab that little mullet ponytail…I’ll pull his hair out and smack the hell out of him…Somebody gotta die.”

Oh boy. If you weren’t sure whether Scott was just playing the part of a lunatic in that 2011 outburst, this should clear things up quite nicely: