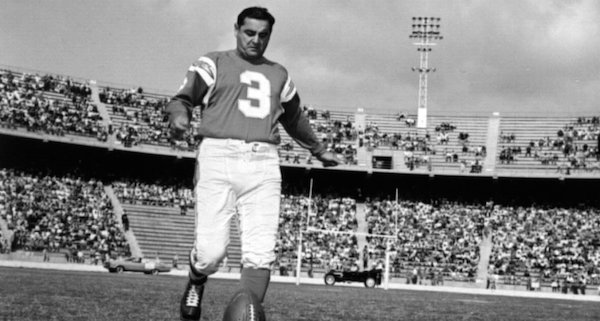 Former veteran NFL kicker Ben Agajanian passed away earlier this week at the age of 98.

Agajanian spent nearly two decades playing professional football and was an NFL champion with the New York Giants and Green Bay Packers, despite having lost four toes on his right kicking foot while working in a factory during college.

Agajanian, known as the “Bootin’ Ben the Toeless Wonder” wore a shoe that featured a hard, square block in the area of the missing toes, which some claimed gave him an unfair advantage — to which he suggested they do the same if they wanted a similar edge.

?Lots of guys said I was cheating because I had the hard square toe,? Agajanian told the Los Angeles Times. ?I said, ?Well, you can do it too. If it helps you, why not?’?

Agajanian, who also played on offense and defense early in his career, led both the All-America Football Conference and NFL in field goal percentage twice during his career and played for 13 seasons on 10 teams over a span of 20 years in three different leagues: the NFL, AAFC and AFL.

But the legendary kicker started his pro football career late, having not been able to play until 1945 after first serving in World War II. Agajanian played his final game in 1964 and went 2-for-4 on field goals and 8-for-8 on extra points, becoming one of just eight players to play in a pro game after turning 45.

He also served as an assistant coach for the Dallas Cowboys and was innovative in teaching players to take a soccer-style approach to field goals.

?When I saw these little fellas kick 50 and 60 yards, I decided that?s the way to do it,? Agajanian told the New York Times.

Agajanian’s technique, which is still used today, became so influential that legendary Cowboys coach Tom Landry recommended he be enshrined into the Pro Football Hall of Fame, claiming the former veteran had ?done more for the kicking game in both college and the pros in the past 50 years than anybody I know,? according to Giants.com.