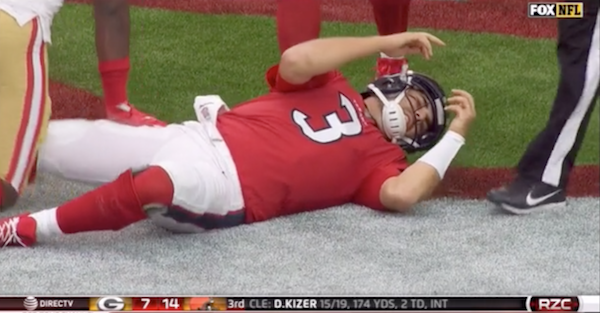 Quarterback Tom Savage suffered a hit during the Houston Texans’ game against the San Francisco 49ers Sunday and briefly was checked out by doctors on the sideline, returned, then left again and was ruled out for the game.

After the contest, head coach Bill O’Brien passed the blame:

O'Brien said he didn't have anything to do with Savage's return to game. "All I do is coach." #Texans

By the way, for those who are blaming O'Brien for Savage's concussion, the head coach has nothing to do with concussion protocol and when a player can return to the game. Nothing. Player has to be cleared, and Savage was the first time by independent neurologist.

O'Brien on Savage: He was evaluated and cleared to return, then evaluated again and not cleared. #Texans

As for reports of Savage spitting up blood or having a seizure, here’s what was reported:

I wanted to make sure I checked this out before tweeting: Savage did not spit up blood and he did not have a seizure.