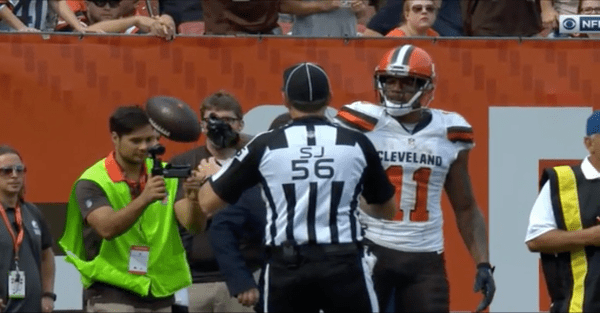 You don’t need to be from Cleveland to feel bad for the Browns after they fell to the Ravens Sunday, 25-20.

RELATED: The Cleveland Browns don’t regret passing on Carson Wentz, even though he just torched them

Attempting to get their first win of the year (it would have been a huge one) McCown completed a 20-yard pass to Terrelle Pryor, landing Cleveland at the Ravens’ 10-yard line with just 27 seconds. What happened next to the Browns, you can’t make up.

As the officials explained in the video above, Pryor was called for taunting, a penalty that was offset by Baltimore’s defensive holding, but was it really even taunting?

Pryor looked to simply lose the grip on the ball as he went to toss the ball to the official, who stood right behind a Ravens player and got hit with the football.

Since the penalties offset, the Browns were forced to repeat the third down from back at the 30, resulting in an interception in the back of the end zone.

Ladies and gentlemen, your 2016 Cleveland Browns.