Call them bizarre, quirky, odd or out of the ordinary. Whatever your choice of terminology, they're the types of plays that raise eyebrows. Whether it's because of amazing feats of athleticism or things "not going according to plan," they're the plays that stick in our collective memories over the years.

When it comes to the NFL, some instantly come to mind. If I mention the "butt fumble" or the "helmet catch" or the "Music City Miracle," the odds are that you know exactly what I'm talking about. No one can forget the "Immaculate Reception" -- arguably the greatest play in NFL history. Today, however, I want to go back to Week 7 of the 1997 NFL season.

No Receivers Open? OK -- I'll Do It Myself

October 12, 1997: Vikings QB Brad Johnson throws a TD pass to himself vs the Panthers. pic.twitter.com/e5ZNzXCUzr

When you think of a quarterback completing a pass to himself, it's probably former Tennessee Titans quarterback Marcus Mariota or Brett Favre who come to mind. In 1992, after being traded from the Atlanta Falcons to the Green Bay Packers, Favre took the field in the second game of the season when Don Majkowski was pulled during a blowout game against the Tampa Bay Buccaneers. His first career pass ended up being an interception that was returned for a touchdown. He followed that up with his first completion -- to himself. It was a crazy start to what would go on to be a Hall of Fame career for the gunslinging quarterback.

Back in 2018, Mariota took the Titans into the playoffs to face the Kansas City Chiefs in the Wild Card round. They were threatening halfway through the third quarter when Mariota took a snap from the Chiefs' 6-yard line, scrambled to the left and threw a pass that was then deflected by Darrelle Revis. Mariota caught the deflection and dove to the pylon at Arrowhead Stadium to put six points on the board. What you may not know, however, is that Mariota's self-completed touchdown pass was not the first in the NFL. That honor belongs to Brad Johnson.

On Oct. 12, 1997, the Minnesota Vikings welcomed the Carolina Panthers to the Metrodome in Week 7 of the regular season. At the time, the team was sporting a 4-2 record. The Panthers were coming off their bye week and entered the contest 2-3. The game was tied at 7-7 heading to the fourth quarter. Johnson had been marching the offense downfield, having taken possession at their own 9-yard line with 8:34 left in the third quarter. They found themselves at the Carolina 12-yard line as the fourth quarter began. The first snap of the fourth was a completion to wide receiver David Palmer that went for nine yards. 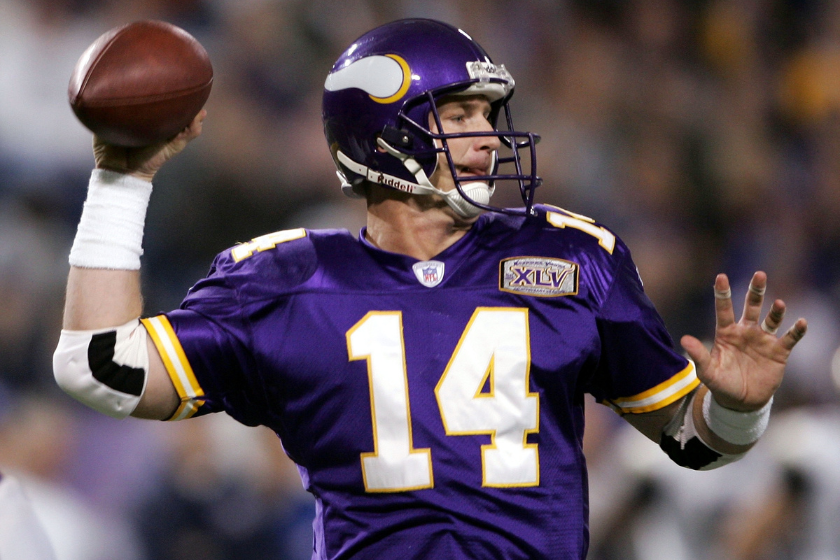 On the next snap, Johnson stepped back and looked to his left. He released a pass that was batted down at the line. Before it hit the turf, Johnson found the ball back in his hands at the 8-yard line. After stepping back and looking as if he was going to throw it again, he pulled it down and ran to the right, bobbing and weaving like any good running back. After dodging a couple of rushers, he dove into the end zone and into the NFL record books. Johnson became the first NFL quarterback to complete a TD pass to himself. The play was even considered one of the strangest touchdowns in NFL history.

"Every now and then I'll see the touchdown pass to myself. It's very unique. It was worth 12 points in fantasy football. And it won an ESPY," Johnson told TwinCities.com.

Johnson, who began his career with the Vikings, would leave Minnesota after the 1998 season. He was traded to the Washington Redskins, where he would be selected for the Pro Bowl for the first time. After two years in Washington, he left for Tampa Bay, signing with the Buccaneers as a free agent. He took them all the way to the Super Bowl in the 2002-03 season, where they defeated the Oakland Raiders 48-21 to become champions. He also earned his second Pro Bowl selection that season while breaking numerous team records along the way.

Johnson played a couple more seasons with the Bucs before getting cut and ultimately returning to the Vikings as a backup. He once again found himself in the starting role during the 2005 season after Daunte Culpepper blew his knee out. He took a struggling offense and went 7-2 through the remainder of that season -- and thanks in large part to that performance, was named the starter going into the 2006 season. Early in that season, he turned 38, making him the oldest starting quarterback in the NFL at the time. His age started to catch up to him, though, and his performance on the field suffered. Ultimately, he was released in February 2007. A month later, he joined the Dallas Cowboys as their backup to Tony Romo.

Wherever Brad Johnson went during his career, he found success. Many of his statistical achievements have or likely will be broken at some point. Regardless, he will always be represented in the history books for this quirky play on an October night in 1997.