Brian Hoyer to make his first official free-agent visit, and it could shake up the QB market 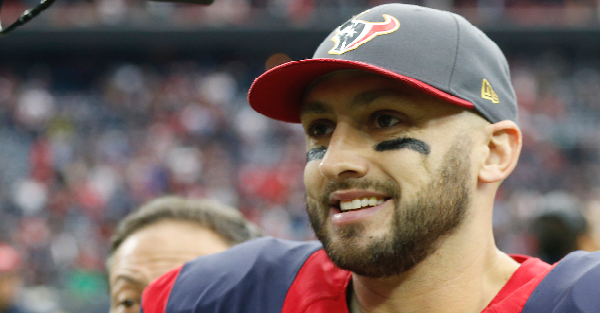 Related: Denver is stuck in talks with Ryan Fitzpatrick over asking price

Brian Hoyer is scheduled to visit the New York Jets as his first free-agency visit this summer, after he was released from the Houston Texans on Sunday.

Brian Hoyer will begin his visit with the Jets today.

Hoyer’s meeting with the Jets comes following New York’s inability to nail down a deal with free-agent quarterback Ryan Fitzpatrick.

Fitzpatrick is coming off a career-year in which he completed 59 percent of his passes for 3,905 yards, 31 touchdowns and 15 interceptions.

Hoyer completed 60 percent of his passes for 2,606 yards, 19 touchdowns and seven interceptions despite splitting time with Ryan Mallett.

If New York decides to go with Hoyer, that would leave Fiztpatrick on the open market with no logical place to go based on his asking price. Denver could be a fit, but the Broncos are reportedly close to a deal with the San Francisco 49ers for Colin Kaepernick.