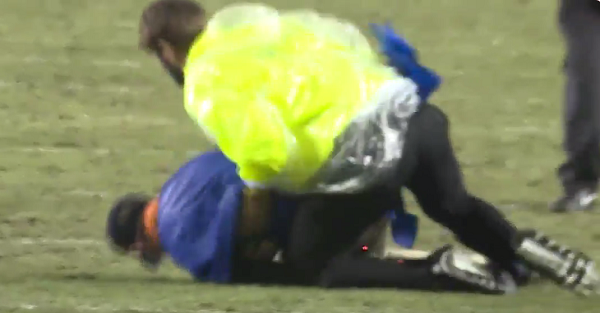 The Kansas City Chiefs handled the Denver Broncos fairly easily on Sunday night 33-10, but it looks like one Broncos fan didn’t quite handle that well. In the third quarter, one fan tried to storm the field and bring some sort of excitement to this game, but he tried the wrong security staff. The Chiefs security staff took him down and might have had the best tackle of the night in doing so:

Best tackle of game was by a guard named Tyler on a Denver fan on the field! @ArrowheadPride @TerezPaylor @TJCarpenterWHB @ProFootballTalk pic.twitter.com/pIvS9VkhmM

And here’s another look:

Just the latest Bronco to get tackled tonight. #ChiefsKingdom pic.twitter.com/JA98It7WUD

RELATED: Chiefs broke out the most jumbo trick play ever and broke a record doing it

Security guard Tyler better get some sort of raise out of this one. That was phenomenal form on the fan tackle.