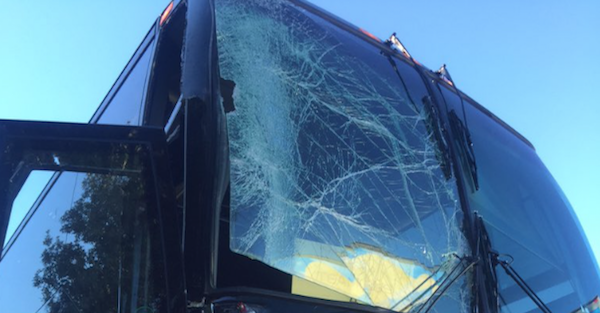 The Denver Broncos tried to get through Super Bowl week unscathed, but generally something pops up amidst the wild days leading up to the big game.

Broncos defender DeMarcus Ware shared a picture from a second bus noting they got into a small wreck:

The Broncos' team buses were involved in a minor accident on the way back from practice. No injuries were sustained & team is back at hotel.

TMZ noted the accident reportedly occurred when a car in front of the buses stopped abruptly, causing the first bus to slam its brakes as the second bus swerved and clipped a motorcycle cop.

Bumper smashed on @Broncos team bus, window sticking out, tow truck on the scene. Bus based in SF. @superbowl50 pic.twitter.com/G2S5NdLslt

CHP motorcycle part of team escort being towed, officer has "zero to minor injuries." Being checked out at hospital pic.twitter.com/nVgjVu4WFV

Thankfully no injuries were sustained, according to the report.