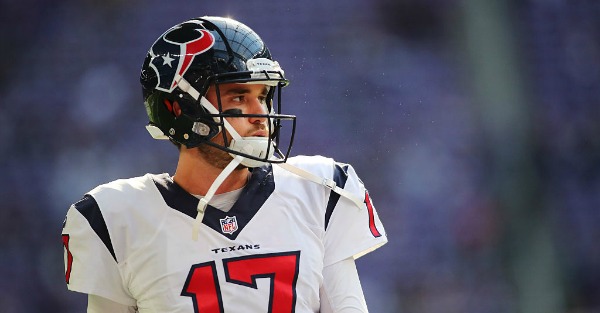 The Cleveland Browns pulled off a shocking trade last week when they acquired Brock Osweiler, Houston’s 2017 sixth-round draft pick and 2018 second-round draft pick from the Houston Texans, and they are already attempting to unload Osweiler.

Related: Report: Texans shockingly unload Brock Osweiler in a deal that could shake up the Draft

According to Mary Kay Cabot of Cleveland.com, the Browns are dangling Osweiler on the trading block, and they are hoping for a third-round pick in exchange for him. The Browns would also give up a fifth-round pick to trade Osweiler. If they can’t execute a trade, the team plans to cut him despite the fact that he is due $16 million guaranteed next season.

“The Browns have been offering Osweiler to teams for about a third-round pick, and are willing to give back a fifth-rounder, multiple league sources tell cleveland.com,” wrote Cabot. “The Browns would also eat a portion of Osweiler’s $16 million contract, as much as half, sources say.

It’s unlikely any team will want to pay that much for Osweiler, so the most likely scenario is the Browns cut him.

“Several NFL personnel executives say they doubt anyone will give the Browns a third-round pick for Osweiler and pay him $8 million a year,” Cabot said. “If that could’ve been done, the Texans would’ve done it, they say.

“The more likely scenario for the Browns is that they cut Osweiler and someone signs him for about $4 million a year. With offset language in his contract, that would reduce the price of the move up to somewhere between 33 and 64 to about $12 million.”

The Browns also cut quarterback Robert Griffin III, and the other QB’s on the roster are Cody Kessler and Kevin Hogan. The Browns are expected to either trade for Jimmy Garoppolo or draft another QB in the upcoming draft.