What Week Will The Free Beer “Victory Fridge” Unlock in Cleveland? 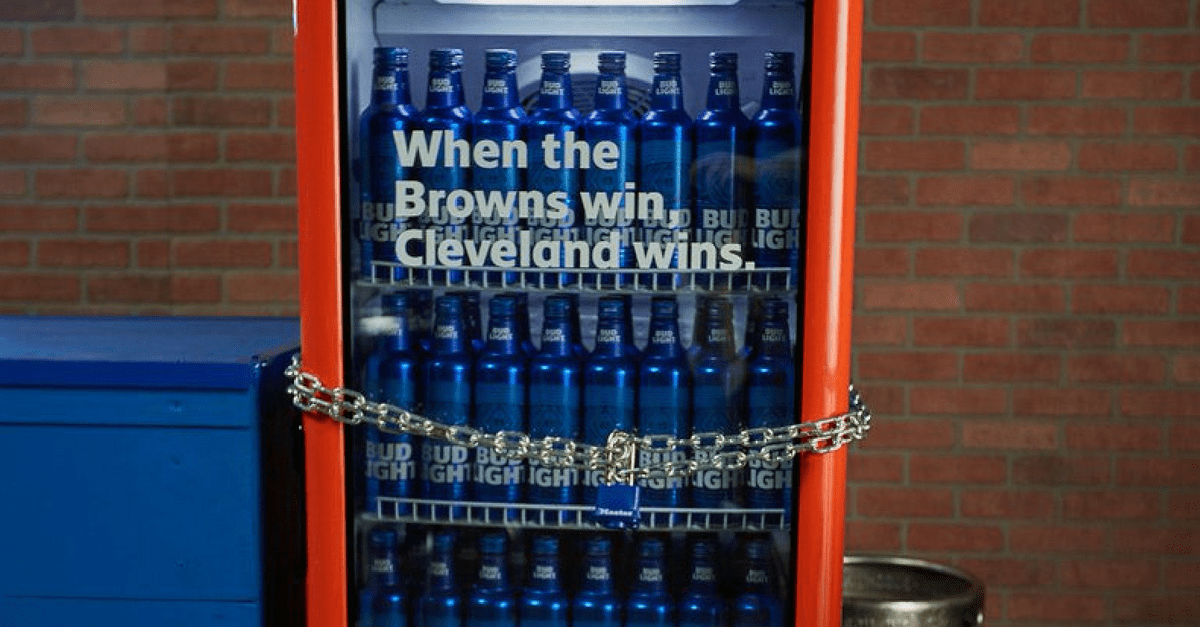 Do you recall where you were December 24, 2016? Better yet, do you know what you were doing that Christmas Eve? The people at FirstEnergy Stadium in Cleveland sure do. It happens to be the last good memory of the Browns.

Spare the undefeated preseason talk. That cold, somewhere in the 30s night in Northeast Ohio was the last time the hapless Cleveland Browns won a regular-season game, when they escaped the danger of a winless season by beating the San Diego Chargers, 20-17, in Week 16.

Since that victory, the only one of the entire 2016 campaign, the Browns have yet to win a meaningful game. Zero since. None in 2017. Winless.

Get ready for a Dawg Pound party, though, because the good people at Bud Light are installing a ?Victory Fridge? in 10 Cleveland bars that will automatically unlock when the Browns win their first regular-season game in 2018. Oh, and the beer ? about 200-300 bottles in each fridge ? will be free for the fans lucky enough to grab one.

You’ve stood by us through it all. We love you for it, and so does @budlight.

These special fridges will unlock celebratory beers when we get our first regular season “W”.#VictoryFridge pic.twitter.com/LgsGNabMpt

Can you imagine the chaos of trying to get one of those aluminum bottles out of a fridge at a raucous bar? It?s going to be insane.

But what week will that be? Does it even happen at all?

Fanbuzz writers John Duffley and Brett Regan pick the best week for the Browns to snap that hellacious losing streak.

First look at the schedule and the big flag might be the Jets at home in Week 3, right?

If you think Hue Jackson is going to be ready for a Thursday night game after going on the road and getting smoked by New Orleans, then you’re probably in the same boat of people who thought he deserved an extension after going 1-31.

The best chance Cleveland has at their first win is Week 7 at Tampa Bay. The Buccaneers are a mess, and if Cleveland is 0-6 at this point, then this is absolutely a must-win before an impossible three-game stretch of Pittsburgh, Kansas City and Atlanta before their Bye Week.

Better stock up on your own beer, Browns fans. It’s (still) going to be a while.

That?s right, a primetime Thursday night victory under the lights at home is going to make for the big fall party and a rough Friday for the Dawg Pound.

By this point, either quarterback Tyrod Taylor is going to be in a groove or it?s time for No. 1 overall pick Baker Mayfield to get under center. Regardless, the Jets are terrible and this is a game to build some confidence on both sides of the ball.

Week 5 versus Baltimore is appealing. So is Week 12 at Cincinnati.

However, if the Browns start the season 0-10, just unlock these things during the Bye Week and let Cleveland fans party. They will have been through enough by then.

READ MORE: Like It or Not, ‘Hard Knocks’ is Changing the Culture in Cleveland