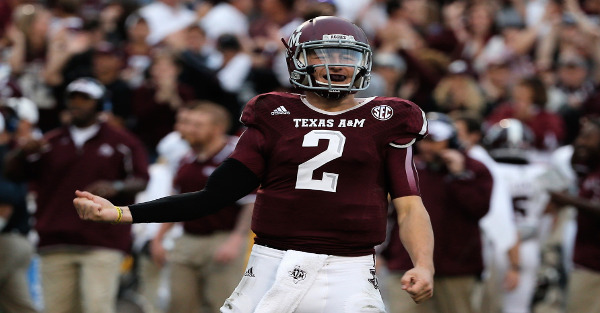 Scott Halleran/Getty Images
Johnny Manziel #2 of the Texas A&M Aggies drops back to pass in the first half during the game against the Mississippi State Bulldogs at Kyle Field on November 9, 2013 in College Station, Texas. *** Local Caption *** Johnny Manziel

Here’s hoping this is the last time Buccaneers quarterback Jameis Winston, the 2015 Rookie of the Year, is mentioned in the same sentence as NFL disappointment Johnny Manziel.

One of Winston’s top targets, receiver Mike Evans, was the top target for Manziel in college at Texas A&M. In Winston’s rookie season, he had trouble connecting with the explosive Evans in the end zone, and Evans’ numbers dropped dramatically from 12 touchdowns in 2014 to just three the following year.

Buccaneers coach Dirk Koetter believes Winston should channel his inner Manziel to help Evans — and the Bucs — build on their 2015 campaign. Not the partied out Manziel obviously, but the electrifying beast of a quarterback that led Manziel to be the first freshman to win the Heisman trophy.

“I mean, how did Mike get used in college? Shoot, Johnny Manziel went back there, scrambled around for 10 minutes and threw a jump ball and Mike caught it. That was their offense. And they were great at it. So we have to take advantage of stuff like that.”

That certainly seemed to work out for the Aggies, who went 20-6 and won two bowl games with Manziel under center. But using that type of offense in the NFL hasn’t exactly worked out for Manziel, who has played in 15 games (eight starts), completing 57 percent of his passes, while throwing seven touchdowns and five interceptions.

Winston had one of the finer rookie seasons in recent memory, throwing for over 4,000 yards and 22 touchdowns while completing 58 percent of his passes.