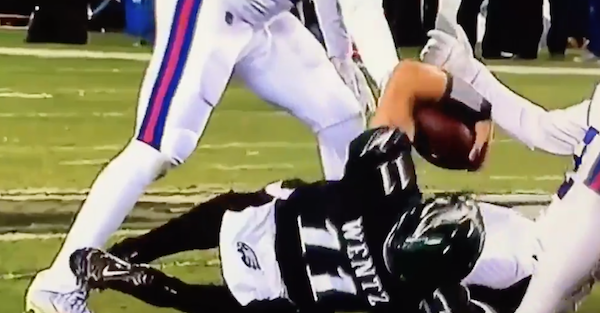 Cam Newton should have a serious gripe with the NFL, if he doesn’t already, after seeing yet another quarterback get a favorable call.

Something tells me Carson Wentz played soccer as a child. pic.twitter.com/c4uDXgADHM

During Thursday night’s New York Giants-Philadelphia Eagles contest, Eagles quarterback Carson Wentz scrambled out of the pocket and forward, only to be held up by Giants’ cornerback Eli Apple.

Wentz went to slide as Apple approached and the Giants defender pulled up as the quarterback actually made contact with him. Wentz flopped like a tenured NBA point guard or soccer player and it drew a 15-yard unnecessary roughness penalty.

Let’s take a short look back to Monday night after officials missed one of the clearest unnecessary roughness penalties there are (the defender clearly makes contact with Newton’s helmet):

Would've been a tough penalty b/c Murphy started his tackle before Cam started his slide, but still 100% a penalty.https://t.co/gQYbM8YlVG

Newton and the Panthers should be lighting up the NFL offices’ phones.