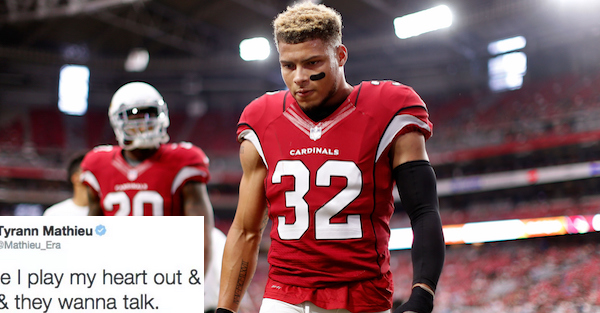 GLENDALE, AZ - SEPTEMBER 13: Free safety Tyrann Mathieu #32 of the Arizona Cardinals walks onto the field before during the NFL game at the University of Phoenix Stadium on September 13, 2015 in Glendale, Arizona. (Photo by Christian Petersen/Getty Images)

Tyrann Mathieu and the Arizona Cardinals had a rough Sunday afternoon.

They dropped a loss to a Pittsburgh Steelers team down to its third quarterback, and got torched by Landry Jones for 168 yards through the air and two touchdowns, including an 88-yard burner from Martavis Bryant.

Those tweets were eventually deleted, but it shows just how frustrated this group had to be after dropping a very winnable game against a Pittsburgh team on its last legs.

Mathieu and the Cards will try to turn things around against the struggling Baltimore Ravens next Monday night.