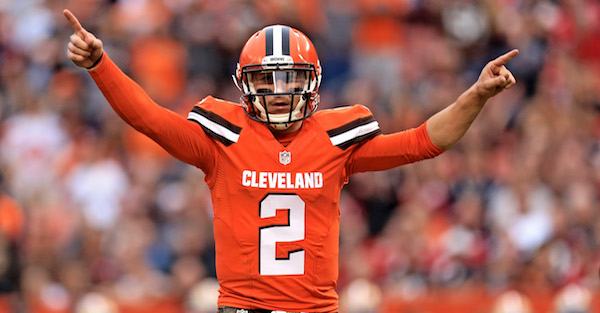 Former Cleveland Browns quarterback and first round draft pick Johnny Manziel had agreed to a deal with the Canadian Football League’s Hamilton Tiger-Cats back in the beginning of January and it looks like contract talks have stalled a bit. His agent imposed a Jan. 31 deadline to “reach a fair deal” — the offer from the Tiger-Cats was just to hold on to his negotiation rights —  or they would turn their ?focus to several other professional options readily available to us.?

However, the team would not be intimidated by the tactic and the team’s GM in Eric Tillman said that he isn’t worried about the deadline despite it being about a week away. He spoke with SiriusXM NFL Radio’s Rick Neuheisel, Alex Marvez and Mark Dominik.

?A lot of stuff happens in the negotiation process,? Tillman said. ?We have a lot of respect for Erik. Our meetings with Johnny have been good.  We?ll be patient. I know the deadline is there but will be fluid. There?s a lot of time between now and the beginning of camp [in May]. ? There aren?t many benefits of being 60, which I am now, but one is that you learn the value of patience. [Burkhardt] is doing his job and trying to represent his client. Johnny certainly is a guy that was an elite player and has a high profile. I?m not going to negotiate obviously on the air but we understand that [deadline] is just part of the process.?

Tillman also went on to praise Manziel for what he saw in workouts for the team and said that the former Aggie’s accuracy was ?absolutely ridiculous.? He also believes that it would be a “win-win situation” should the two sides reach a deal for this season.

Manziel has not played pro football since the 2015 season, as the Browns released him back in March of last year after growing concerns over Manziel?s mental health. Since that release, Manziel was indicted for assault charges, fired by his agent, and suspended by the NFL under its drug policy. Manziel?s fall comes after he became the first redshirt freshman to win the Heisman Trophy back in 2012.