Former NFL player Chad Johnson is a man who wears many hats.

His football career was the stuff of legends, but his off-the-field issues came to overshadow his stellar play. Johnson has reinvented himself in retirement, trending again and again in the American pop culture psyche because of his undeniable charm.

No matter how many enemies Johnson may have made in the NFL, he has also gained plenty of fans. One such fan is Netflix star Sharelle Rosado, who is the lead of the hit show "Selling Tampa."

How did the reality TV stars meet, and who was Johnson married to before? 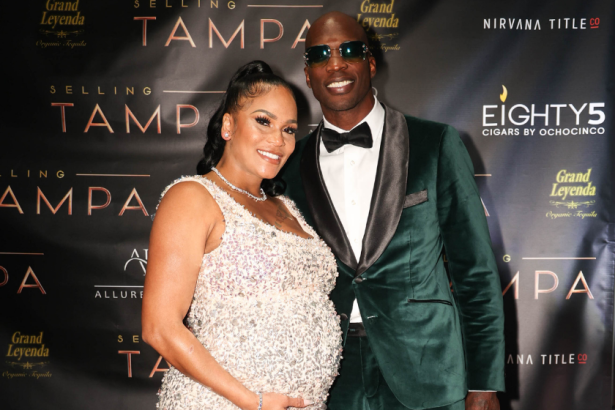 According to Rosado's website, Rosado is the founder and CEO of Tampa Bay's Allure Realty, which has been in the Sunshine State for about as long as Tom Brady has. The show follows Rosado and the Allure Realty employees as they sell multi-million dollar mansions in the Tampa area.

Rosado is a US Army veteran and former paratrooper -- an undeniably cool job -- who was deployed to Afghanistan twice.

Her experience as a veteran woman of color informs her decisions as a businesswoman, and she still takes time to mentor and empower other women of color.

When she saw the success of "Selling Sunset," she contacted the show's producer, Adam Divello, and convinced him to bring the real estate-focused reality series concept to Tampa, she said in an interview with Glamour Magazine. She even communicates with "Selling Sunset" stars Chrishell Stause, Christine Quinn and Mary Fitzgerald.

Rosado is a successful and busy woman who is also very pregnant with Chad "Ochocinco" Johnson's baby, the couple's first child together. She broke the news to Chad during one of the episodes of her show.

RELATED: Chad Johnson's Son Wants To Be Ochocinco 2.0, But Can He?

Rosado told the "I Am Athlete" podcast that the two met because of their daughters from previous relationships. Both of their little girls run track and Rosado decided to message Ochocinco -- who had eight children by this point -- after seeing him at a track meet.

"He was always a crush of mine. Like for years. Sexy, tall, chocolate. That thang know he fine," she said on the podcast. "But we would run into each other during track meets. I would see him. I didn't say anything, but I slid into his DMs, and he responded like two seconds later. We exchanged numbers. He FaceTimed me right away, and then we just started talking."

They went internet official in October 2020.

Johnson proposed to Rosado in January 2021, at a time when she was noticeably less pregnant. When pressed about Johnson's documented domestic issues, Rosado resolutely stands by her man, asserting that she believes he is a great man today.

Now, with the first season of "Selling Tampa" streaming in homes across the United States, Chad Johnson's fiancée is ready for the limelight. She could ask for tips on how to handle it from her soon-to-be husband. Lozada is an Afro-Puerto Rican television personality, model and spokesmodel from Brooklyn, New York. She's best known as a cast member on the VH1 reality show "Basketball Wives" for her marriage to former Kentucky Wildcat and NBA star Antoine Walker.

Lozada was in all five seasons of the show's first stint, which ended in 2013 -- the same year Lozada began her four-year marriage to professional baseball player Carl Crawford.

But between Walker and Crawford, there was a brief and tumultuous marriage to Chad Johnson following a two-year engagement. The union lasted less than Ochocinco days.

They wedded in July 2012, but Lozada filed for divorce in August 2012 after claiming she suffered domestic abuse by Johnson. The trauma she suffered lingers to this day.

Johnson struck a plea deal with prosecutors on the misdemeanor domestic battery charges and avoided jail time by pleading no contest, serving a year of probation instead.

Still, Johnson swears he's changed and appears to be in a happy and healthy relationship today. The Cincinnati Bengals drafted Johnson in the second round of the 2001 NFL Draft. Johnson spent the next ten years in Cincy, reaching six Pro Bowls and being named to two All-Pro teams during the decade.

The NFL star spent the 2011 season, the final of his career, with the New England Patriots, the closest Johnson ever got to a Super Bowl ring. Johnson signed a one-year deal with the Miami Dolphins after the Patriots but was dismissed after his domestic violence charges went public.

Johnson briefly played for the CFL's Montreal Alouettes from 2014-15. However, Johnson's two years in the Canadian Football League were marred by injuries and bad behavior. He also joined the Liga de Fútbol Americano Profesional de México and played one game for the Monterrey Fundidores.

Johnson's name is practically synonymous with wide receiver antics. The talented wide-out was often in danger of his personality outsizing his team's capabilities. When his football career was over, Johnson's personality was finally able to fully spread its wings.

Johnson has been a regular on reality TV, from "Dancing with the Stars" to VH1's "Ultimate Catch."

He has hosted "WWE Raw," tried out for an MLS professional soccer team, attempted the life of a bull rider in the PBR, and acted on television's "Blue Mountain State" and "The League."

The former wide receiver has also developed smartphone apps while also fighting in the Floyd Mayweather vs Logan Paul undercard in June 2021.

Nobody won the fight.