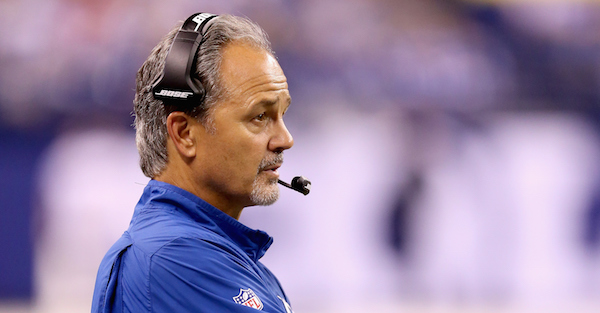 Baltimore Ravens defensive coordinator Dean Pees is retiring at age 68 after spending eight seasons with the team, and head coach John Harbaugh already has a candidate in mind to replace him.

According to Mike Preston of the Baltimore Sun, the Ravens are reportedly interested in bringing back Chuck Pagano as defensive coordinator.

Two top guys to keep an eye on in Ravens search for new D-coordinator are Chuck Pagano and Vic Fanzio.

Related: Fired NFL head coach may already be circling his next job

Pagano was recently fired as the head coach of the Indianapolis Colts after six seasons, and he was previously defensive coordinator with the Ravens in 2011. He was also the secondary coach for the team from 2008 to 2010.

The Ravens have spoken to former Indianapolis Colts head coach Chuck Pagano, trying to lure him back to Baltimore to be the defensive coordinator, per colleague @MikePrestonSun. Ravens have other options, but he appears to be their focus at this point.

Chicago Bears defensive coordinator Vic Fangio is also a candidate for the job.

Pagano would be a logical fit for the position, and there will likely be several teams interested in him as an assistant if the Ravens choose someone else.

The Colts weren’t particularly good on defense during Pagano’s tenure, but they also didn’t have the best personnel. Pagano’s defense was among the best in the league in 2011 when he was with the Ravens.