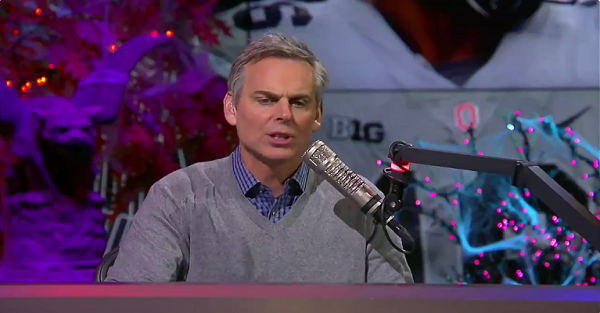 Cowherd went on a rant during his show, The Herd, on Thursday saying he believes there’s a 50/50 chance that the five-time Super Bowl-winning coach will retire, especially if the Patriots defeat the Eagles on Sunday.

The host pointed out a quote in which Belichick said he believed quarterback Tom Brady has “earned the right to make the decision to retire,” which he somehow believes gives away the coach’s own plans.

“That is not a small thing,” Cowherd said, while beaming with pride at his discovery. “The Kraft family is doubling down on Brady over Belichick. They’re doubling down on it. Okay, remember the first time, I told you, we saw the ESPN story that Jimmy Garoppolo, a threat, get him out of town. What they were saying is, ‘Mr. Belichick, Tom trumps Belichick.’ The ESPN story reported it, I theorized it before the story came out, everybody’s denying it but now they’re admitting there’s tension. Well why would there be tension? So Jimmy Garoppolo was a threat, out of town.”

Cowherd continued to point out that Belichick, “a legendary grudge-holder,” was forced to trade both Garoppolo and Jacoby Brissett for “less than market value,” despite always wanting a succession plan and numerous capable backup quarterbacks.

He also acknowledged that the coach “suddenly” assisted in his coordinators — Josh McDaniels and Matt Patricia — getting head coaching jobs, which he’s “never” done in the past. Additionally, the coach openly helped McDaniels go to the Indianapolis Colts — an AFC team with Andrew Luck, who the host referred to as the best quarterback in the conference other than Brady — with “all of the Patriots secrets.”

Finally, Cowherd noted that Belichick has been more “light-hearted” during Super Bowl week by wearing a fedora while walking off of the team plane and smiling more during media sessions, to which the pundit presumed meant that Sunday’s game would be his “swan song.”

So there you have it, folks. Bill Belichick is going to retire because he wore a fedora. Might as well start looking for a new coach now, Bob Kraft!

While there are some valid points made here, it all boils down to Cowherd wanting to hear himself talk during a “hot take,” as is usually the case. Surely, Belichick will still be wearing sleeveless hoodies on the Patriots’ sideline next season, despite the pundit’s conspiracy theories.