Colin Kaepernick fires back at Bills fans, other critics 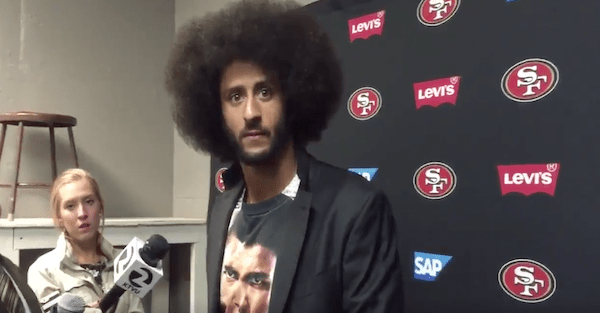 Colin Kaepernick’s first start of the 2016 NFL season didn’t get off to a great start, and many of the issues surrounded his national anthem protests.

In Buffalo, Bills fans made controversial shirts with crosshairs on Kaepernick’s face, called him a “Muslim” and booed the quarterback while he kneeled.  (H/T SI)

Colin Kaepernick on being called un-American: 'I don’t understand what’s un-American about fighting for justice and liberty for everybody.'

Despite rumors suggesting such, Kaepernick has not converted to Islam.

There has been plenty of controversy surrounding the national anthem protests, started by Kaepernick to take a stand against the oppression of “black people and people of color.”

The movement has shifted throughout the sports world, with some high school athletes laying on their backs with hands up and college athletes receiving alleged death threats. The latest lashing out against people protesting the national anthem ended up with fans booing the home team ECU band.

NBA star LeBron James and Carolina Panthers quarterback Cam Newton are among athletes who have yet to, and by all accounts won’t protest the national anthem.