Controversial Colin Kaepernick has made a decision on his NFL future 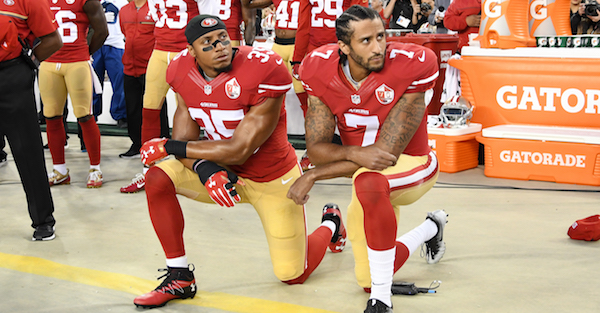 Colin Kaepernick will hit the open market when negotiations start for free agents on March 7-9.

#49ers QB Colin Kaepernick's new agents, Jeff Nalley & Sean Kiernan, informed 32 teams yesterday that they rep him and he will be opting out

Kaepernick will be a fascinating free agent as a former Super Bowl quarterback who looked on the cusp of becoming one of the top young players in the NFL.

He became a vegan, injured his shoulder, lost a ton of weight and made plenty of political statements by kneeling during the national anthem.

After a frustrating 2015 campaign where the 49ers only won two games and Kaepernick regressed, throwing for just 1,600 yards, six touchdowns and five interceptions, the quarterback bounced back in 2016 despite his team actually getting worse.

But that wasn’t the story of his 2016 campaign and it won’t be the narrative moving forward.

There will certainly be teams interested, but whether they are willing to take his off-field distractions (primarily kneeling and political statements) remains to be seen.