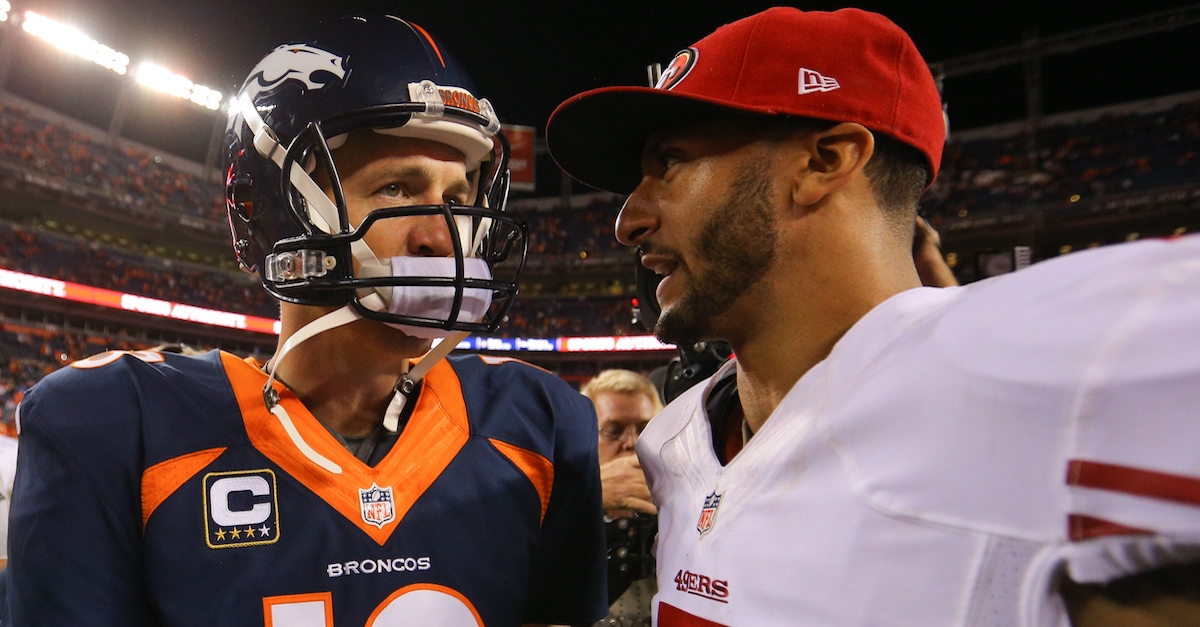 While the Miami Dolphins and Baltimore Ravens have reportedly considered adding Colin Kaepernick, a radio host in Denver is reporting there’s no chance the Broncos consider the former San Francisco 49ers quarterback:

You can stop talking Kaepernick. Was told, "under no circumstances" will @broncos bring him in. "Better chance Elway comes back to play."

I asked, "what if both QBs go down w/injury?" Then, Kaepernick?" Answer…"still no." Absolutely will not happen. Not @broncos.

While Denver’s defense remains stout, their quarterback play held the Broncos back last season. Early returns on Trevor Siemian and Paxton Lynch haven’t been great. You’d imagine Kaepernick would give Denver a better shot to win now, but it looks like Denver is fine playing the long term game.

After rumors circulated that the Ravens had been met with “resistance” at the thought of signing Kaepernick, the team has released an official statement:

“We are going through a process, and we have not made a decision. Steve Bisciotti has not told us we cannot sign Colin Kaepernick, nor has he blocked the move. Whoever is making those claims is wrong.” – General Manager Ozzie Newsome

Former Ravens star Shannon Sharpe criticized the team in a sharp manner after passing on Kaepernick earlier last week with two peculiar quarterback signings. With that said, reports say it came down to Bisciotti.

That is a story in and of itself but Dianna Russini of ESPN also brings word that an additional NFL team saw its owner jump into the mix to block potential interest, even if she does not name the team specifically.

Also to note this is not the first time an NFL team has wanted to add Kaepernick to its roster, but the move was blocked by the team's owner

On Kaepernick’s side, this is a brutal chain of events, even if not an overly surprising one. Much of the sentiment surrounding his continued employment has centered on fear from fans and even advertisers. At the end of the day, the owner is the one that must answer for that more so than the front office, personnel and coaching positions for the squad.

At the same time, it is a (very) bad look for a lot of people to see ownership standing in the way of a better player finding work because of non-violent protest and, until Kaepernick signed, this will be a dominant storyline to follow across the NFL world.

However, it sounds like ownership isn’t quite on the same page as the team’s owner Steve Bisciotti is leaning toward not signing him.

While the front office is supposed to make these kinds of decisions, don’t be surprised if Bisciotti intervenes and vetoes any potential Kaepernick deal. He is one of the owners strongly against the national anthem protests and would probably not appreciate the guy leading the charge to be on his team. He did say the team is bringing in another QB without a team to work out.

Should Flacco’s back injury prove to be trickier than its one week recovery timeline, backup Ryan Mallett could be the guy the team turns to to lead them. He has experience as he’s appeared in several games for New England, Houston and Baltimore, but the Ravens probably want someone with a little more playoff or starting experience to be their guy.

Former No. 8 overall pick and starting quarterback for the Dolphins, Ryan Tannehill was injured on a non-contact play Thursday morning, where his left foot planted and he immediately hit the ground and had to be helped to the locker room by trainers. With that in mind, the Dolphins are reportedly considering adding Kaepernick:

Here’s video of the play:

Steve Smith weighs in on Kaepernick

“Here’s the thing, he is on the street for a reason,” Smith said. “It isn’t because of all of the other things. He is not accurate. He is not the guy that commands starter money that’s going to be a backup. He is a guy that is going to have to change his game if he wants to play in this league. That is the question for all aging players and you’re always aging. One year after the other until you get to the exit door.”

As of April, Kaepernick and Diab were still together. And judging by the tweet, they appear to be going strong.

Ray Lewis is giving Colin Kaepernick advice for how to act, and he’s basically telling Kap to “stick to sports.”