Contract negotiations between No. 3 overall pick Joey Bosa and the Chargers have reached a breaking point 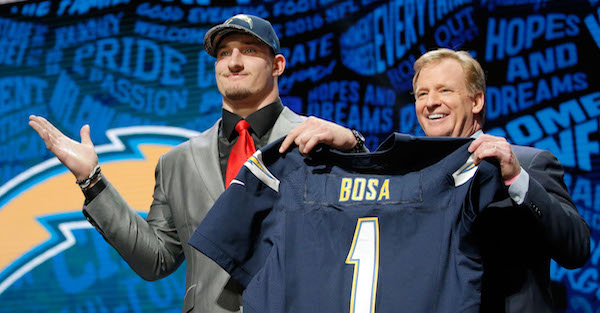 Jon Durr/Getty Images
CHICAGO, IL - APRIL 28: (L-R) Joey Bosa of Ohio State holds up a jersey with NFL Commissioner Roger Goodell after being picked #3 overall by the San Diego Chargers during the first round of the 2016 NFL Draft at the Auditorium Theatre of Roosevelt University on April 28, 2016 in Chicago, Illinois. (Photo by Jon Durr/Getty Images)

The war between Joey Bosa and the San Diego Chargers is getting uglier by the day as the team announced Wednesday that they had pulled their contract offer to defensive end Joey Bosa after his reps declined the organization’s “best offer,” per ESPN.

Related: Joey Bosa?s holdout continues as teammates call him out

Per ESPN, the Chargers offered to pay Bosa 85 percent of his $17 million signing bonus at signing and the rest in March. Bosa’s camp turned down that offer in hopes of acquiring the entire amount by the end of this year. The Chargers also, reportedly, want to include offset language in Bosa’s contract.

The dispute is reportedly over offset language (which gives a team the ability to wash its hands of a player who is released instead of paying guaranteed money to the player, who would also receive money from a new team if he?s signed to another contract) and his signing bonus.

The two sides reportedly hadn?t spoken since late July, and there appears to be a concern that Bosa could hold out for the entire season. If he does so, the player compared by some to J.J. Watt, Jared Allen and Michael Strahan could end up back in the draft pool next summer.

The Charger released a statement, per ESPN, that noted they offered Bosa an initial signing bonus larger than what any rookie had received in the past two drafts and the largest payment and highest percentage of a signing bonus received in the first calendar year of any Chargers first-round pick since the new collective bargaining agreement in 2011.

Bosa’s reps chimed right back, claiming the team manipulated facts and decided to negotiate in the media.

“We will say, that it is ironic that the team now takes issue with the timing of Joey’s arrival, since the Chargers unilaterally decided to remain silent for the first 14 days of training camp instead of replying in a timely fashion to the proposal we made on the eve of training camp on July 28th,” the statement said.

Bosa can not be traded, as that deadline has passed. If he is not signed by Week 10, he would not be eligible to play in 2016-17. The Chargers have until the draft next season to negotiate a contract. If they are unable to sign him, they wouldn’t obtain any additional picks or compensation for losing Bosa to the draft. Bosa wouldn’t be able to have any communication, nor would he be able to attend the draft combine if he does re-enter the draft next year.