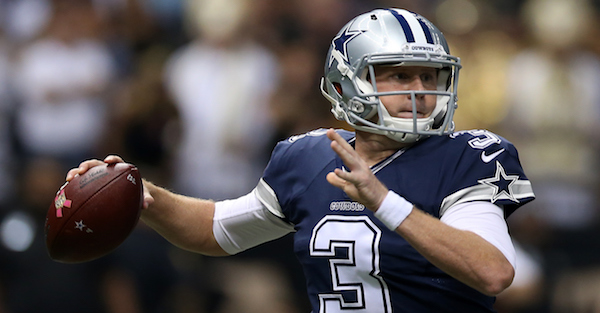 NEW ORLEANS, LA - OCTOBER 04: Brandon Weeden #3 of the Dallas Cowboys throws a pass during the second quarter against the New Orleans Saints at Mercedes-Benz Superdome on October 4, 2015 in New Orleans, Louisiana. (Photo by Chris Graythen/Getty Images)

Dallas Cowboys quarterback Brandon Weeden hasn’t had the best start to his tenure as starter in Tony Romo’s absence, although he did have a remarkable game-tying drive against the New Orleans Saints in Week 3.

And while some fans might be slamming him on Twitter, Weeden isn’t paying them any attention. During a media session Wednesday, the quarterback discussed deleting his Twitter before his rookie year for this specific reason, per Dallas Morning News:

“I was pretty interactive in college,” Weeden said. “I remember everybody that always talked crap, they never had a picture of themselves. It was some cartoon or something, and it was always probably a 12 year old kid that damn sure never played quarterback, and damn sure never played quarterback in the NFL. I don’t need that kid telling me, ‘What the hell you thinking throwing to this guy?’ I don’t need that.

As the quarterback for the Cowboys, it’s probably the better move to stay off social media entirely.

Weeden and the Cowboys (2-2) will try to get back on track when the host the New England Patriots (3-0) on Sunday.